Recently opened in Tropicana City Mall, ChicKing boasted of real recipe, real taste and real fried chicken, as written on their brochure. I tapau a set yesterday, to taste how real it was. 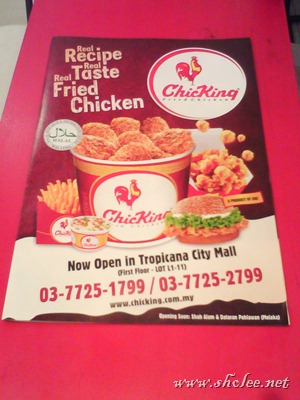 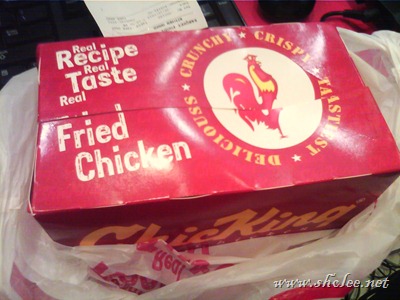 I ordered Strips Meal which consisted of 4 pcs Strips (2 regular and 2 spicy), Mash Potato, Coleslaw and a glass of Pepsi. 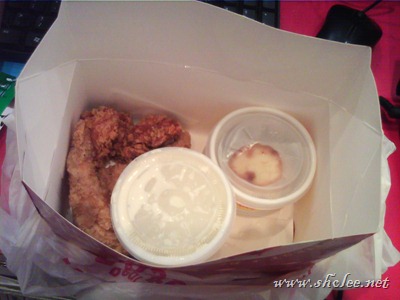 I actually had an unpleasant experience, giving me a bad first impression.

When I first reached the restaurant, there wasn’t many customers. There were 2 counters, 1 was closed so I went to the opened one. Suddenly this guy appeared out of nowhere and jumped my queue. The cashier attended to him instead of me =.= While waiting, the supervisor who was busy chatting with 2 ladies realized a queue building up and opened the other counter. Instead of calling me, he called the ones behind me. I was really annoyed… am I invisible? This cashier pulak busy packing the orders and didn’t bothered taking mine, instead calling someone from the kitchen to do so. After placing my order, I was given a number and was told to wait until my number was called. I had to wait about 10 mins before my number (4) was called.

Yes, they are new but this is not the way it should be. I don’t think other fast food chain would tolerate such practice. They even have a handmade note asking us to excuse them as they are still new *slaps forehead*! The cashier who took my order didn’t explained much of the menu even though I looked blur. Apparently there were different flavours for the strips and she just asked if I wanted regular or spicy. I had to ask if I could have mixed. Same goes to the drinks, I was looking around and I don’t see any indication of other flavours so in the end I took Pepsi. Why bother asking when it’s not clearly written or explained?

The food itself, thankfully, was ok. The meat was quite chunky but tender. Spicy tasted much better as it covered the bland chunky taste as compared to the regular ones. Mash potato and coleslaw tasted different which was good. My bill was RM9 (no tax here) which was, to me, quite expensive for a small portion of fast food.