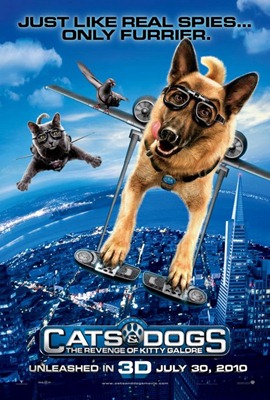 Tyger chose to watch this movie last Sunday for the obvious reasons :-) I told Hubby this looked like a sequel and I was right! The first one was 9 years ago and I couldn’t remember if I had watched it before!

Diggs is a police dog who has been in the kennels more often as he always disobey his orders. Shane, his partner/ master, tries to adopt him but couldn’t as the police wouldn’t allow it. Lou, leader for the dogs, wants Diggs to join in their quest to bring Kitty Galore down, partnering with Butch although Butch is against it. Diggs is happy as he can proof that he still has what it takes to be an agent. While on an assignment, they met Catherine from MEOWS and found out more of Kitty Galore. From here, cats and dogs work together to bring Kitty Galore down…

I know for sure that my angels did enjoy the movie, laughing at some parts and cringing at others. As for me, it was funny at some point but mostly boring and dull. Not sure if it was due to my lethargic and tired self or the movie itself was really a let down. The story line is basic, common and predictable… nothing fancy except for the gadgets deployed ;-) I guess this movie totally fits the bill of a kid’s movie :p The ending hints of a part 3… I hope they bucked up and do better than this.