22nd June 2010 is an uneventful day for me… all good or bad things must happen in three’s… in this instance, all bad :-(

Firstly, I didn’t sleep well for the past few nights… missing my angels… home was so quiet without their ramblings and noises. Can’t wait for the day when they can move back to KL and stay with us for good :-)

Secondly, I received my MAXIS statement last night and had a rude awakening =_= I had been charged for data usage amounting to RM60.33. Errr… my mobile doesn’t have any data connection settings nor do I use data (They could see this through my history). Gave MAXIS CONTACT CENTRE a call this morning… another rude awakening! MR. AZIZI and MR. SEAN claimed that the data charges were incurred due to the FREE WIFI I had used previously. WTF! What does FREE WIFI had anything to do with MAXIS data charges??? Both kept going on about the WIFI connection could have been very poor so it automatically rides on MAXIS network!!! TOTAL RIP OFF!!! Come on lah! I know I’m not technically inclined but you don’t have to bullshit about this!!! Most FREE WIFI’s ride on STREAMYX as such it doesn’t link up with MAXIS BTS!!! So where is the connection to charge me??? They claimed they have the itemized billing of the usage and they can courier it to me. So I’m waiting for it now in order to report this CRAP to MCMC. Just got to know that I’m not the only victim. Apparently a lot of people also kena their GET RICH SCAM already! WTF!!!

Last but not least, on the way to Hubby’s work place after work, got stuck in a very unusual traffic jam. We (Tumpang my colleague) reached the roundabout after Section 13 PJ towards SS2 and was stuck for nearly 15 mins!!! The cars were stuck and not moving… thanks to selfish motorists who didn’t bothered giving way for others to pass through! We were just 3 cars away… GEEZ!!! Why were those motorists so brainless??? They left it somewhere??? 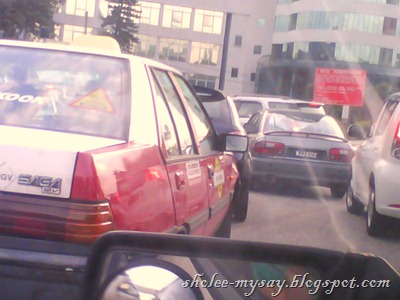 Again… what an uneventful day!!!