Thanks to the R.AGE, Hubby and I got to watch the premier of Robin Hood, ahead of US release by a few hours! Ok ok… I was twittering non-stop before hand to win a pair of these tickets and it finally paid off :p (R.AGE had a Twitter contest about Robin Hood in order to win these tickets) 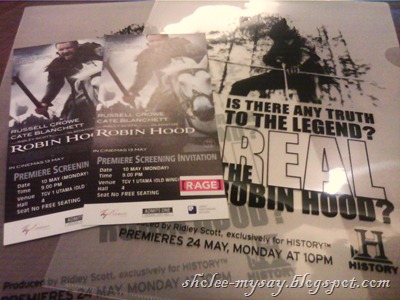 The movie maybe an epic drama but it was filled with action and excitement. The scenery was so beautiful, the casts were perfect. Russell Crowe and Cate Blanchett were a perfect couple as Robin Hood and Lady Marion Loxley. I truly enjoyed the movie, fully mesmerized by the ‘history’ of Robin Hood. It was realistic too and a much, much, much better version than Kevin Costner’s Robin Hood, Prince of Thieves ;-)

… and the lamb became the lion…