Year One is a comedy based on pre-historic hunters. Jack Black and Michael Cera are the leading actors. 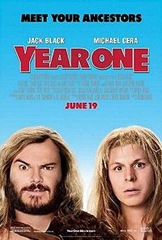 It’s about 2 good friends who wanted to be hunters but failed terribly. Mishaps and misfortunes followed them wherever they go. They have been banished from their home for eating the forbidden fruit. This is where their misadventure begins!

Honestly, it’s another idiotic comedy, luckily not as terrible as Tropic Thunder (which I switched off after 15 mins urgh!) All I can say is that I’ll not watch another Jack Black movie. The best, I feel, was still School of Rock.