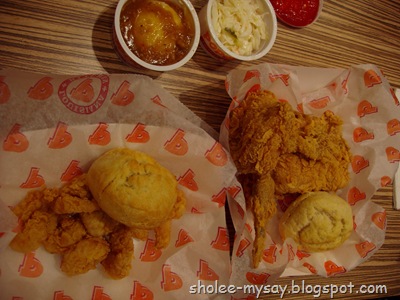 The biscuit was actually big, like a bun but tasted like a biscuit cum muffin. I liked it as it’s different, although a bit dry. The shrimps were kinda jelak for me (TGIF’s shrimp tasted much better). I think they use plain flour for the crispy skin as that’s what I tasted. Same goes to the chicken, crispy but tasted like flour. Overall, it was oily too. Coleslaw tasted so so only but I really liked the mashed potatoes, different yet tasty. Probably we are so used to KFC; hence we just didn’t know how to enjoy Popeye’s. It’s just not our cup of tea ;-) 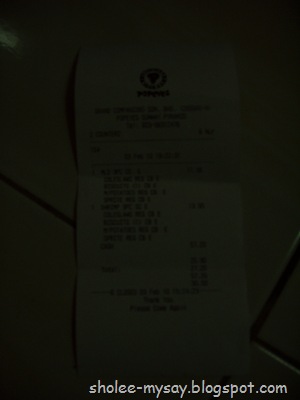 The bill was RM27.20 which is kinda costly for me. We normally spend less than RM20 at either McDonald’s or KFC for a meal of 2.