I have not watched a Chinese movie for a long time, somehow it doesn’t attract me much. It’s either about gangsters or fights or cops or pokers. It’s too predictable. Poker King was no different. 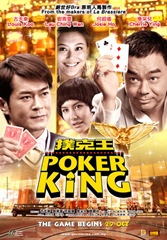 It’s about a casino king’s son, Randy, who is not into the casino business, on how he survived being on his own after his father’s death. Uno, the right hand man, disinherited Randy from his father’s will, giving him a condition to win back the empire. In actual fact, he’s hoping Randy will learn the hard way to appreciate his father’s gaming empire and finally taking over it.