On 31st December 2009, around 9.10am, I recognized the interrupting song on Hitz Song Crasher hence I immediately called hitz.fm. I didn’t expect the call to get through as I have been trying the whole week and it was always engaged. They were giving away iPod Nano’s that week! I was hoping to win one for hubby’s birthday gift ;-)  Surprisingly, I heard the ringing tone, yes! I got through! I was so happy! I got the answer right; gave my name, IC and contact number; was told to wait for their call to collect the iPod Nano.

I waited for about 3 weeks, still no calls. I didn’t know who to contact, in the end, I sent a Facebook message to JJ, hitz.fm morning crew DJ. Yes, Facebook message; a very useful tool ;-) JJ was helpful; immediately that same day, a lady from Monster.com called me. However, it was a disappointing one as she claimed there was a miscommunication between them and hitz.fm, it was supposed to be an iPod Shuffle and not an iPod Nano :-( I was so devastated! I really couldn’t accept it as I didn’t hear any public apology from hitz.fm about this blunder on the radio. I sent a Facebook message to JJ again about this. After a few clarifications, he asked me to send an official email to his producer, Brian.

After a week, the same lady from Monster.com called me, apologizing profusely about this miscommunication as hitz.fm had kept in touch with them on my case. Honestly, this lady was really nice and genuinely sorry about what had transpired. It was actually a blunder from their liaison company, Zoos Advertising. However, she was still persuading me to accept the Shuffle but I was not about to give in yet as I have not heard from hitz.fm. I sent another email to Brian, hoping for an official conclusion.

Few days later, a personnel from Zoos Advertising called me. I felt belittled while talking to her thus made me decided not to forgo my Nano! I wonder if she had ever placed herself in my shoes; how would she have reacted if she was in my shoes? She was a little annoyed with my second email to Brian; the term I used to describe how I felt about my tele-conversation with the lady from Monster.com. I was like ‘Halloo! Who’s the victim here?’ Anyway, she did apologized for this unforeseen circumstances, admitted it was their mistake and followed up with an email on the collection details.

Finally, we collected the iPod Nano this morning! After a month plus of waiting, calls and emails, I got hubby his belated birthday gift ;-) Only these questions remain unanswered. Am I the only unlucky victim? Did the previous winners experienced the same and accepted the Shuffle instead? 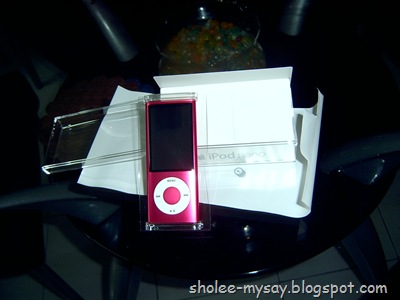 2009 ended on a happy note for me, after all the bad things that had happened in the year. It was like a new beginning, something good and positive to look forward to in 2010. Even though there was a minor hiccup, I did get what I was entitled to in the end :-) It has also encouraged me to join more contests; hoping for THE big break ;-)

Thanks to hitz.fm and Monsters.com for this wonderful gift. Especially to JJ and Brian, thanks for your kind assistance :-)