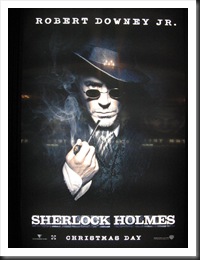 I was excited when I first saw the trailer of this movie. When it finally reached our shore, I just couldn’t wait to watch the movie. Yes, Sherlock Holmes and Dr. Watson are here! However, we chose the wrong place and time to watch this movie.

Firstly, after so many weeks, the movie was still hot! Practically all the tickets sold out every Wednesday. Last Wednesday, we couldn’t rely on TGV Pyramid anymore as we were worried the movie could be off the screen soon. So we searched both TGV and GSC; the only cinema with suitable seats and tickets available was TGV 1 Utama. We were surprised the tickets were cheap; only RM6 per ticket.

Secondly, hubby and me were both dead tired after work and the only show after office hours was at 10.30pm. So half of our brains were asleep.

Thirdly, the cinema we got was actually stuffy and in poor condition! No air-con, the sound system was poor, the seats were very close to each other, not much space for legs! It’s a total opposite of TGV Pyramid! TGV should consider renovating the cinema here soon.

Lastly, the movie, no introduction required, was good and funny, typical Sherlock Holmes. We were able to de-stress and wind down ;-) Casting Robert Downey Jr as Sherlock Holmes and Jude Law as Dr. Watson was a very good choice; they were totally into it, good chemistry. The only difference was the costumes, different from the original Sherlock Holmes. I was also surprised it was directed by Guy Ritchie. Yes, Madonna’s ex-husband ;-)