Nowadays there are many road users from NKVE exiting at Subang Toll. The traffic jam is terrible every morning, starting before the toll at times. It’ll be a bottleneck after the toll and all vehicles would try to squeeze into the 4 lanes toward Subang/ Federal Highway. If you are a LDP user, you would know what I mean, similar to the Sunway Toll towards Kelana Jaya or vice versa.

In this instance, we would experience 1 car from the left squeeze into the lane and 1 car from the right, then left, then right, continuously. Get my drift? However there are some selfish drivers who didn’t want to give way at all. They would just stick very near to the car in front, not wanting to give way at all. I’ve seen so many of these selfish drivers, either during LDP Sunway Toll jam or Kesas exit towards Subang Jaya jam.

This morning, I had a rude awakening. We were stuck in the NKVE Subang exit jam. So we were waiting in line to go left into a lane. When it reached our turn, this silver coloured MyVi didn’t want to give way. He just drove forward and stayed very near to the car in front. My hubby revved forward and tried to squeeze in when the car in front moved but that fella just drove forward and his side mirror ‘kissed’ my side mirror! I was so shocked! WTF! So bloody rude and selfish right???!!! I quickly grabbed my phone out and took a photo of this fella! He just opened his window and pushed his mirror straight, didn’t even apologized! Come on lah! We were all stuck in the same jam… why must he be so damn bloody selfish early in the morning??? It’s not like we were jumping queue, I would understand if he were to do that. 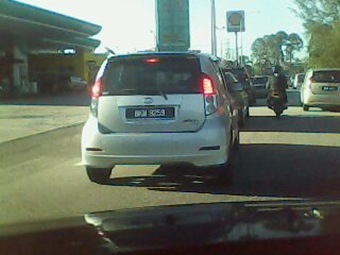 When we were further down, the traffic eased and we passed this fella, I quickly tried to take a photo of him but the sun was facing me, couldn’t snapped his face to be published here! See the glaring sunlight :-( 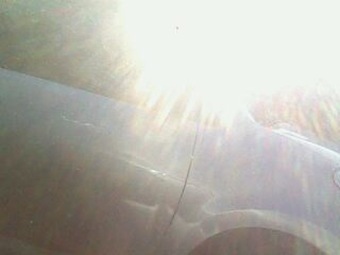 I always believe in this karma ‘What goes around, comes around’. He better learnt to be patient and give way or he could be experiencing something worst in the future. A road bully perhaps? In fact, the driving classes should include Courtesy Driving in their syllabus! Luckily I don’t have a weak heart or I could be suing him for giving me a heart attack early in the morning!

some drivers ought to be punished for bad driving like the one u highlight. and also I notice most drivers like to race and speeding so its not surprising to see accidents happen everyday.