Not forgetting, I have tons of books to Konmari as I am feeling overwhelmed by it! Too many for my liking and I don't have that many lifetime to finish reading it! Most have been in my 'to be read' pile for years and it's foxing already. If I'm not reading it now meaning it will still be in that pile for many years to come so I think it is time to let it all go. Honestly why hoard it when I'm not enjoying it? Also it's not sparking much joy at all! Let others enjoy the beautiful story it brings rather than piling up in my box or cupboard. Definitely too many to appreciate it properly.

With this RMO/MCO, it has actually made me realised my hoarding tendency. It's like a habit, a drugged like feeling that I must hoard to feel accomplished! When I spring-cleaned my living and dining room previously, I was surprised at the many stuff I have been keeping for no reasons at all! It's that mentality where I might need it in the future but after 10 years, it's still in the box. Also, when I finally wanted to use it, either I forgot I have it and bought a new one or it has spoilt. Soooo........ what's the point then? I have yet to venture into my kitchen and bedroom, will tackle the most obvious one first, my books. I didn't follow the Konmari order, just did it based on my feelings.

I have not thought of shopping thus far as I have what I need. After work, I have my Astro TV, books, crochet, Pokemon Go and Wizards Unite to entertain me aside from my beloved family. I have not ventured out of the house at all aside from my garden. I totally loved this feeling actually!

P/S: I do pity those extroverts whom I know would die of boredom and nothingness! Can feel their cobwebs and mushrooms growing too LOL!
No comments:
Email ThisBlogThis!Share to TwitterShare to FacebookShare to Pinterest
Sections: Thoughts

I've been reading lots of funny posts and puns about husbands having trouble getting their groceries as the Ketua Rumah but I am just thankful that my hubby knows the groceries itself! Just list it down and he'll just go buy and return with all the right stuff! He goes to the hypermarket once a week for our groceries as there are nothing much near our house. We did try to check the major online websites for deliveries near us but then they are fully booked until the end of RMO. Some doesn't even deliver to our area! So what's the point then???

Well, with lots of negative thoughts and puns on the internet, it's really hard to stay positive during this lockdown. Easily irritable and annoying, we have to shift our mindset to become open-minded just to stay positive. Please see below... 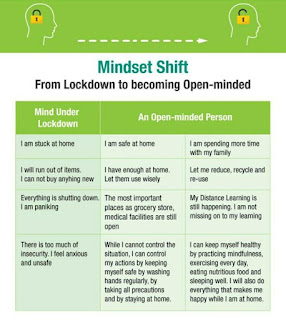 Someone shared this in Facebook and it is definitely true for our situation right now. Unfortunately I can't credit whoever created this as it was not mentioned in the post. So practice this and shift your mindset to an open-minded one!
No comments:
Email ThisBlogThis!Share to TwitterShare to FacebookShare to Pinterest
Sections: Thoughts

April Fool's Day but I got fooled instead as my laptop crashed down on me 11 times today! I had to get my colleague's assistance to send my report as I couldn't even saved nor zipped some files! My supervisor has to remotely checked and diagnosed my laptop before finally found the reason for it's absolute reluctance to work and now so far it's okay *fingers crossed*!

Anyway, after the annoyance and all, I have to keep reminding myself to be thankful... although the heart yearns for something else... just have to be patient.
No comments:
Email ThisBlogThis!Share to TwitterShare to FacebookShare to Pinterest
Sections: Thoughts 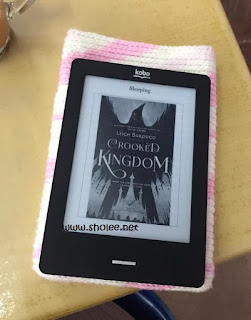 Welcome to the world of the Grisha.

Kaz Brekker and his crew of deadly outcasts have just pulled off a heist so daring even they didn't think they'd survive. But instead of divvying up a fat reward, they're right back to fighting for their lives.

Double-crossed and badly weakened, the crew is low on resources, allies, and hope. As powerful forces from around the world descend on Ketterdam to root out the secrets of the dangerous drug known as jurda parem, old rivals and new enemies emerge to challenge Kaz's cunning and test the team's fragile loyalties.

A war will be waged on the city's dark and twisting streets - a battle for revenge and redemption that will decide the fate of the Grisha world.

This is the closure I've been waiting for. After 2 failed attempts to bring down Jan Van Eck and Pekka Rollins for cheating and lying to them, the third time is either a charm or a fool which Kaz had to risk taking. The deal is the deal. Brick by brick.

Leigh Bardugo is smart. She made sure every plot is just right, not more not less. The way she planned the events and the characters with precision that I can't even complaint. As per book 1, I totally liked the way she wrote the story, each with their own point of view which is why I did not get lost even with so many characters in it!

Although Kaz seemed to be the most brutal but he's still a kid with a fear to confront with and still has compassion for his loyal buddies. He's actually the most vulnerable of them all and I so feel for him. Especially when he wanted to touch and be with Inej but his fear keeps taking over the better of him... gosh that was filled with anguished broken sadness!

With a few unexpected plot twists, the momentum felt here was not as great as book 1 but it still gives the depth and closure I wanted. I would have wanted more of some and less of others but then it can't be perfect or we would not have enjoyed it at all. The love, the loss and the lack of it all made the book worthwhile to finish! 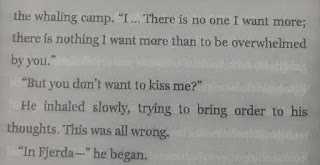 No comments:
Email ThisBlogThis!Share to TwitterShare to FacebookShare to Pinterest
Sections: Books

Finally, it has reached 2 weeks! Another 2 weeks and we would be out of jail, hopefully! I'm still feeling good being home and all but getting a little restless from not being able to do more since working from home. Well, work is more important as it pays the bills and debts plus put food on the table so have to be serious and discipline so that I won't stray. I guess if it's my own business then the freedom would be different and easier to manage as opposed to now. Having said that, small businesses are not doing as well due to the pandemic which has affected the economy badly so having a full time job is still more reliable and stable. Another fruitful day ends and tomorrow begins a new month, April 1st aka April Fool's Day :-)
No comments:
Email ThisBlogThis!Share to TwitterShare to FacebookShare to Pinterest

Another day working from home but it rained in the morning! Darn I can't sleep in to the cool, soft pattering of the rain! Having to wake up early for work with such weather was so torturing especially knowing the bed is just waiting there........

Anyway, I didn't sleep well lately with the numb pain on my right buttock nagging me the whole night. It was injured when I fell down the stairs last month but it stopped aching after a while. Lately it has returned with that numbing ache which was intense at times and my right shoulder has started aching too. Feels like every part of my right side is aching........
No comments:
Email ThisBlogThis!Share to TwitterShare to FacebookShare to Pinterest
Sections: Thoughts

Day 10... finally survived 10 days at home without going anywhere...
10 days working from home which was bearable at some point...
In fact, I find it more hectic as having to communicate via technology is somewhat more of a sore for me.. can't gauge their reactions... not forgetting having been chased for this and that... it's all a little too much at times.
I guess it's just me lah... just some ninny rant, nothing much today
No comments:
Email ThisBlogThis!Share to TwitterShare to FacebookShare to Pinterest
Sections: Thoughts

It's been a busy and hot 'work from home' day but fulfilling nonetheless. I just can't wait for Saturday to get my hands dirty........ my garden seeks my attention! Looking at the many luscious blooms and bushy greens are definitely soothing for my soul and sanity. It never fails to calm me effortlessly. So in keeping them keeping me happy, I do have to mind and fertilise each pot every weekend :-) I don't mind that at all as I do enjoy having my hands dirty in the soil, in fact, gardening to me is therapeutic! The sad part, I had some seedlings in an egg tray but I just realised a rodent had apparently been eating them!!! So I have to sow a new batch :-(

Well then, what else is new? I'm having a bad toothache after eating some cold oranges today during lunch. The pain has ceased but the dull throbbing is still there which makes it so damn unforgiving! I am afraid of going to a dentist but if this throbbing persists then I guess I have no choice but to visit one. Praying hard that the pain goes away when I wake up tomorrow morning! *fingers and toes crossed*
No comments:
Email ThisBlogThis!Share to TwitterShare to FacebookShare to Pinterest
Sections: Thoughts
Older Posts Home
Subscribe to: Posts (Atom)