[MPOV] My Brilliant Friend (Book 1 of the Neapolitan Novels) 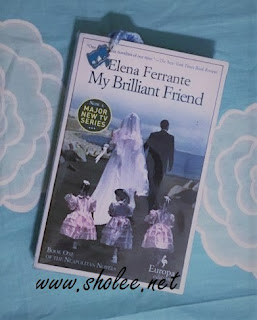 My rating: 3/5
Goodreads rating: 3.97/5
Published: September 25th, 2012
Author: Elena Ferrante
Translator: Ann Goldstein
Genre: women's fiction, Italian literature
My Brilliant Friend is the first book in Italian writer Elena Ferrante’s world-acclaimed quartet of Neapolitan novels, which documents the friendship between Elena Greco and Lila Cerullo. It was originally published in 2011.
A modern masterpiece from one of Italy's most acclaimed authors, My Brilliant Friend is a rich, intense and generous hearted story about two friends, Elena and Lila. Ferrante's inimitable style lends itself perfectly to a meticulous portrait of these two women that is also the story of a nation and a touching meditation on the nature of friendship. Through the lives of these two women, Ferrante tells the story of a neighbourhood, a city and a country as it is transformed in ways that, in turn, also transform the relationship between her two protagonists.

This is my pick for June's Book Challenge:
1. TBNT Book Challenge: A translated book OR written by a non native-English speaker
2. Book Spin / Book Spin Bingo: letters E and F (Elena Ferrante)
This is book one of the Neapolitan Novels quartet by Elena Ferrante. The story revolves around Lena and her neighbourhood, especially on her love and hate friendship with Lila. This book is about her childhood and adolescence, narrated in her point of view where she has typed it down into her computer. Here she shares her story from the day she met Lila, how their friendship progressed and eventually blossomed into the best buds they are today.
This is not the first and I guess it will not be the last where a translated book got me nowhere. I'm not sure if it is due to the translation or what nots but I just couldn't get into the story, just couldn't grasp it nor resonate with it. It was hard for me to wear Lena's shoes and view it all through her eyes. I could imagined her speaking though with her slang.
In the chapter of their childhood, there is quite a few reference of husband beating wife and children, brothers beating sisters, arguments between neighbours and drunken men fighting in this poor neighbourhood. It is similar to some of the TV series or movies I have watched hence I was able to relate here. Btw, this has been made into a TV series which I have yet to catch.
Lena does has a competitive streak which elevates her jealousy towards Lila and always wanting to be a step better though feeling inferior always. Both are relatively good in their studies but Lila had to stop schooling and started working for her family. However, she still goes to the library to read more. Lena does missed their friendship when Lila slowly distanced away from her then, leaving Lena to move on without her.
During their adolescence, Lila has blossomed into a beautiful young lady and all the legit bachelors came knocking on her door. Lena, however, became plumpier and not as pretty as Lila in her own view, which led to her being more inferior and lack of confidence, hiding like a shadow behind Lila but she still strives to be good in her studies. When Lila continues to befriend her again, Lena was happy to have her best friend back though with a kind of resentment at times or envy in another!
It is a complicated kind of friendship with many characters and subplots that were thrown in to make this poor neighbourhood dramatically alive. Through it all, I got confused, passionless, at times interested and a little intrigued. I do want to enjoy this acclaimed novel by Elena Ferrante but it is somehow not my cup of tea though I have persevered to finish it. It did reminds me of J.K Rowling's Casual Vacancy with a similar kind of scenario but of a different pace that I have DNF it.
The author chose to write it like a screenplay, a memory play to be precise, with Lena reminiscing of her past with Lila and typing it into the computer. It did feels like a drama on TV but with the main character narrating the whole drama from her point of view only and the remaining characters are there to supply the drama with more chaos and friction, just like an actual TV drama. I guess I'm not in favour of such prose as such I got lost in translation, so to speak. I've speed read through just so I could finished and know how it ends instead of DNF it.
As this is book 1, the ending has a slight cliffhanger so you would need to have book 2 ready so as not to stop suddenly, like me now LOL! If you like melodramatic kinda novel like a telenovela then this quartet should be up your alley. Lena is like many of us, booknerds or not, who are insecure of ourselves, lack of confidence with the inferiority complex hence it is easily relatable on this point.

''They won't touch me, because I'm ugly and I don't have my period,'' she said, ''but with you they might. If anything happens, tell me.''
I looked at her in confusion. We were almost thirteen, we knew nothing about institutions, laws, justice. I went home. I realized that with those last words she had admitted that I was important to her, and I was happy.

"Not for you: you're my brilliant friend, you have to be the best of all, boys and girls." - Raffaella Cerullo