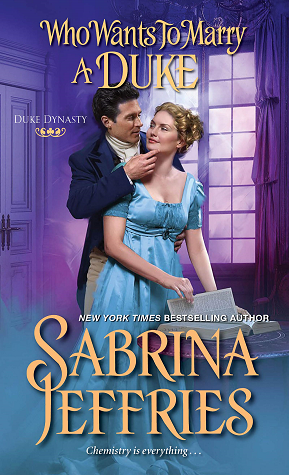 My rating: 4/5
Goodreads rating: 4.07/5
Publisher: Kensington Books
Published: August 25th, 2020
Author: Sabrina Jeffries
Genre: Historical romance, regency romance
A past kiss with adorably bookish Miss Olivia Norley should be barely a memory for Marlowe Drake, the Duke of Thornstock. After all, there are countless debutantes for a handsome rakehell to charm beyond a young lady whose singular passion is chemistry—of the laboratory type. But Thorn has not forgotten—or forgiven—the shocking blackmail scheme sparked by that single kiss, or the damage caused to both their names. Now Thorn's half-brother, Grey, has hired the brilliant Miss Norley for her scientific expertise in solving a troubling family mystery. And the once-burned Thorn, suspicious of her true motives, vows to follow her every move...
For Olivia, determining whether arsenic poisoning killed Grey's father is the pioneering experiment that could make her career—and Thorn's constant presence is merely a distraction. But someone has explosive plans to derail her search. Soon the most unexpected discovery is the caring nature of the reputed scoundrel beside her—and the electricity it ignites between them...
The above taken from Goodreads.
Thanks to Netgalley for this e-ARC in return for my honest review.
A lady of science unexpectedly gotten tangled with a handsome duke at a ball and was coerced into asking for her hand in marriage. They met again 9 years after she has rejected his proposal and yet their attraction for each other has not ceased. She is on her way to be a prestigious chemist whilst he is a rakehell but their paths crossed again when she was hired by his half-brother to uncover a family mystery. Slowly but surely they became tangled again and this time with much to desire upon!
This turns out to be an engaging and enthralling read! A third book from the Duke Dynasty, it was well written that I could follow through even though I have not read the first 2 books. I have enjoyed how the story panned out and I didn't expect such an adventure with some 'Agatha Christie' in a regency romance novel! Not forgetting the leading lady has spine, strong willed with ambition that made the difference.
My first Sabrina Jeffries and I find the story refreshing. Her take was a little too modern at times and yet thankfully it did had me wanting to finish it soonest just to know the ending, even though we knew it is definitely a 'Happy ever after' one :-) The way she portrayed the leading lady, though modernised yet induced with some feminine characteristics of that era.
I only find the couple talk or think too much especially during their coupling moments LOL! So much going through their respective minds during such ecstatic times! Oh well, I guess it sort of fitted in the perspective of their dilemma that made the story more endearing.
That ending though, I was so hoping to know who did it! Instead it is open ended leading to the next Duke Dynasty book. It includes a teaser chapter of the next eligible duke, The Last Duke Standing coming in Summer 2021!!! Can't wait for it to debut soon so that I can have my closure, who did it?!
Some notable quotes for me:

God, he must have been a heedless arse nine years ago not to have seen her unusual qualities. Now he knew how to appreciate a woman as unique as she, no matter how badly she danced or what lapses she had in following societal rules.

But the rest of the truth is more selfish - I want to marry you out of a thoroughly ignoble impulse to have you in my bed whenever I wish. Does that make you feel any better about my marriage proposal?

It's clear I will never gain your respect, much less your love. And I find I require both of those for a marriage, after all.

And yes, he loved Olivia. She was the ink in his well, the quill in his hand.