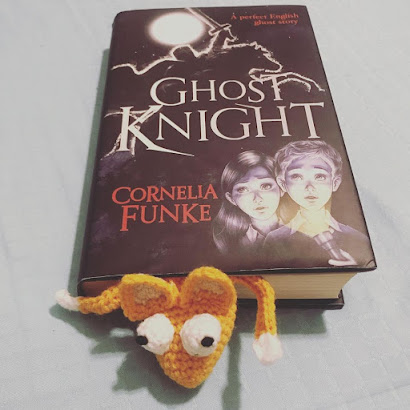 #tbntbookchallenge:
8) Read a ghostly book OR a food memoir
I've picked this ghostly book for #tbntbookchallenge and I have not regretted it at all. I had a few in mind but this hardcover was the prettiest of them all! Thankfully, a spark joy cover with a spark joy story!
Jon is an 11 year old boy going through a hard time accepting his mother's boyfriend, Matthew. His father has passed away earlier on and he doesn't want Matthew to replace his father. He has even nicknamed Matthew as The Beard. With more trouble and mischief, his mother finally sent him to a boarding school. Unfortunately a new trouble started brewing at this boarding school when Jon is being hunted by a ghost who kept calling him Hartgill! Coincidentally, his mother's surname is Hartgill. He found comfort with a new friend named Ella and together they embarked in an enthralling journey of ghosts, mysteries and murders.
As it's a book for young adults, I have expected it to be a breezy read. I did not expect it to be distinctly English and yet easily absorbed. I could imagine the story itself with a little help from the many lovely illustrations. Overall it was an entertaining book which I've thoroughly enjoyed. As the print on the cover says it: 'A perfect English ghost story.'
I liked that it touches on relevant issues faced by many young teens and the way it intertwined, coming in full circle was a really good one. Jon having trouble accepting a new stepfather but in the end having to solve the mystery with the said stepfather, who would have thought that? A strong female character, Ella, helped to balance the story as Jon's partner in crime, touché!

"My best friend is a girl," I said. "And you know her uncle. In fact, you're going to marry him."

It did slow down a bit at times especially when Jon was overthinking but the overall momentum was good enough to keep me entertained. I honestly liked the illustrations which were simple yet adorable!

I saw Longespee leaning against the wall. He looked so much like a living man that it was hard for me to believe he'd been dead for centuries.

"You are my squire, Jon Whitcroft," he answered. "You can call me any time. And I, you."

I have yet to read Cornelia Funke's Inkheart trilogy (I've watched the movie many times as I love it!) which has been on my TBR pile for a long time. I guess it is time to bump it up! Anyway, if you are looking for something light yet with some mystery, Ghost Knight is a good pick :-)
Email ThisBlogThis!Share to TwitterShare to FacebookShare to Pinterest
Sections: Books