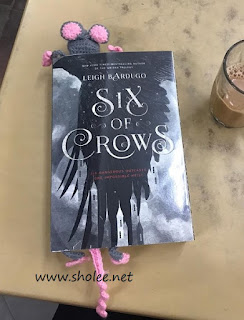 Ketterdam: a bustling hub of international trade where anything can be had for the right price—and no one knows that better than criminal prodigy Kaz Brekker. Kaz is offered a chance at a deadly heist that could make him rich beyond his wildest dreams. But he can’t pull it off alone. . . .

A convict with a thirst for revenge

A sharpshooter who can’t walk away from a wager

A runaway with a privileged past

A spy known as the Wraith

A Heartrender using her magic to survive the slums

A thief with a gift for unlikely escapes

Kaz’s crew is the only thing that might stand between the world and destruction—if they don’t kill each other first.

#tbntbookchallenge:
3) Read a children's book OR a YA book that's been on your TBR

This book has been on my TBR pile for ages so when I saw this challenge, I just had to go with this after pondering it for a few days. Oh boy, it's definitely worth it as I was taken into a new world, a magical universe that I was so into it!

Kaz aka Dirtyhands recruited a small crew to handle an impossible job in favour for a huge payout which will make all of  them rich beyond their wildest dreams. The crew accepted it without much qualms as they have faith in Kaz. Also being able to pay off their respective debts and be free is the key motivation for Jasper, Nina and Inej. Matthias wants his pardon and out of jail card. Wylan, on the other hand, just wanted to belong somewhere. Each with their own delectable skills, albeit some doubts about the job, they managed to get through it all as a team and not forgetting their ruthless impossible journey!

I loved how the story progresses with each character building and Leigh Bardugo has planned the plots so seamlessly that everything felt so real! Though Kaz is the protagonist, the story was told in 6 different viewpoints, each reliving their true background with more depth that I was impartial to them. The way she has written it was so easily understood, without much confusing flair. I can so imagined it overall especially Kaz whom I thought Jared Leto would fit easily. Also Zoe Kravitz would be the perfect Inej. Dave Bautista would be an excellent Matthias!

It did started of kinda slow but slowly in building up the momentum and there were many highs after that. If you enjoy fantasy with such unique characters, this is one you should not miss. I've not read Leigh's famous Grishaverse novels i.e. Shadow and Bone trilogy but now I'm intrigued and curious of her other books. I can't wait to start on Crooked Kingdom, the second and final book for this duology.

Some notable quotes:
It's time to pay your debts, Kaz. You never get something for nothing.

Brick by brick, I will destroy you!

The heart is an arrow. It demands aim to land true.

Trickery is not my native tongue, but I may learn to speak it yet.

I have been made to protect you. Only in death will I be kept from this oath.

When they took everything from you, you found a way to make something from nothing.