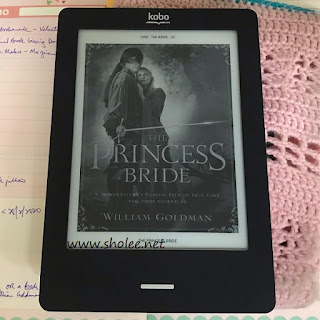 What happens when the most beautiful girl in the world marries the handsomest prince of all time and he turns out to be...well...a lot less than the man of her dreams?

As a boy, William Goldman claims, he loved to hear his father read the S. Morgenstern classic, The Princess Bride. But as a grown-up he discovered that the boring parts were left out of good old Dad's recitation, and only the "good parts" reached his ears.

In short, it's about everything.

#tbntbookchallenge:
2) Buddy-read a love story OR a book about redemption


Hello, my name is Inigo Montoya. You killed my father. Prepare to die.

OMG, this 2 phrases were repeated non-stop! It actually made the book more funny and not annoying at all LOL! It's such an endearing read that truly had me engaged from the start until the end. I've not watched the movie so I had no idea what it was all about but I've heard many rave reviews from the book club I'm in. Also, this month's #tbntbookchallenge is to buddy-read a love story so I jumped on the Romance Book Discussion's bandwagon since it is their featured book for discussion.

This book is a summarized version of S. Morgenstern's The Princess Bride. According to William Goldman, it's filled with lots of unnecessary fillers which will bore any readers to death. His father read to him when he was young and he was so intrigued by it so he decided to gift the same book to his son. However, his son was so bored with it that he did not finished it. William found out why later on... unknowingly, his father had actually read all the good parts and left out all the boring ones.This has prompted him to recollect it all, only the good parts, and compiled it into this book.

The book started off with William's discovery of the good parts and what the book actually consisted that leads to this reconstruction. Interestingly, he has clearly summarized and explained in detail of what actually went on in the original classic part by part. He stayed true to the original story and only add in his thoughts, his narration so to speak, which was so quirky yet funny!

The story itself was predictable for some parts like who's the man in black and who hired the trios to kidnap Buttercup. I just couldn't fathom some parts like when the man in black rescued Buttercup, why couldn't she recognized the voice as Westley's. Also, Westley is the captain of his ship and he's not been back to his ship for so long so how come the pirates didn't come looking for him or sailed away? There were some mind nibbling here and there but then I guess it's just a story after all!

Some classified it as a love story but overall, it has everything! From adventure to sci-fi to thriller, it has every genre in bite size to fill everyone's palette. The ending though, I think some current authors have followed such satirical ending which I didn't like. It's open-ended, hanging, without a closure. Other than that, I've enjoyed this book tremendously! 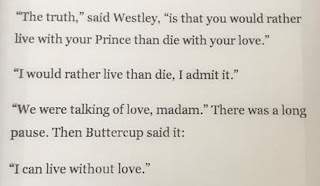