MPOV: The Relic Spell (Book 1 of the Phyrian War Chronicles) 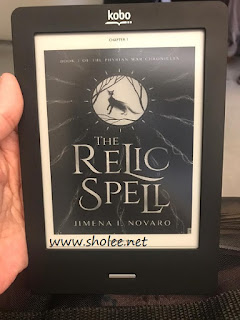 Magic rolls through Orion Tamura’s history classroom like a tidal wave of golden light that only he can see. The spell is deadly, and Orion has no idea who cast it or what they want.

Answers are scarce—all of Port Monica’s sorcerers vanished fourteen years before, including Orion’s father. Armed with his limited knowledge of magic, Orion is the only one left in the city who is strong enough to investigate the origins of the spell.

But the city’s leaders will stop at nothing to censor and sabotage anyone who gets close to the truth. Invisible otherworlders watch every move Orion and his friends make, and a mysterious sorcerer who knows the answers haunts Orion’s dreams.

Thanks to BookSirens for this e-ARC in return for my honest review.

This book definitely reminds me of The Sorcerer's Apprentice. I kept imagining Jay Baruchel as Orion LOL! Filled with lots of actions that I've lost the plot a few times! Honestly, I had to reread it many a times to grasp the terror which had definitely slowed down my reading progress.

A book about sorcerers and demons, Orion is a young sorcerer who has been catching demons with his friend, Max. He has been trained by his mother who is apparently quite ill. Both his father and Max's parents have disappeared 14 years ago including all of Port Monica's sorcerers without a trace leaving Orion the only sorcerer left to defend his city... well apparently not. With a deadly relic spell reenacted after 14 years and a new sorcerer in town, Orion has to find out the origin of the spell to try to stop it and also stop this new sorcerer!

I truly applaud Jimena for having written this so well! It's action-packed with loads of fighting scenes and yet she could translate it onto paper neatly! I do enjoy her nicely paced prose and was entertained from the start.

Somehow the overall premise did sounds like Twilight + The Mortal Instruments + Xena LOL! It seems to have borrowed scenes from all over, compressed and refined to become The Relic Spell. I guess this is just me thinking too much whilst reading this with my mind actively envisioning this, imagining that. Hence the comparison started when a scene sounds familiar or a part created similarly like this or that.

All in all, it's YA through and through with much sorcery and bravery plus a little love. It does carry some weight of the current social stigma which is difficult to comprehend with their current self. So relevant and on point, hopefully it will indirectly guide the youngsters accordingly with topics like trying to fit in with the cool kids, proving themselves worthy to others and bullying. Also as there's reference to Orion's love for Max, I wonder if it'll developed in the next few books or so. I liked how this book ends, at least it's not a cliffhanger and leave me hanging much LOL! With so much going on, I wonder how book 2 would fare...
Email ThisBlogThis!Share to TwitterShare to FacebookShare to Pinterest
Sections: Books