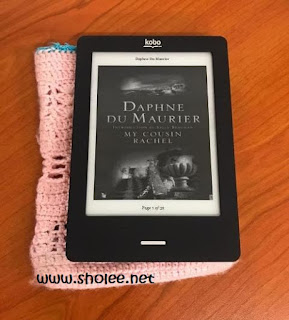 Orphaned at an early age, Philip Ashley is raised by his benevolent older cousin, Ambrose. Resolutely single, Ambrose delights in Philip as his heir, a man who will love his grand home as much as he does himself. But the cosy world the two construct is shattered when Ambrose sets off on a trip to Florence. There he falls in love and marries - and there he dies suddenly. Jealous of his marriage, racked by suspicion at the hints in Ambrose's letters, and grief-stricken by his death, Philip prepares to meet his cousin's widow with hatred in his heart. Despite himself, Philip is drawn to this beautiful, sophisticated, mysterious Rachel like a moth to the flame. And yet... might she have had a hand in Ambrose's death?

I'm surprised at the outcome of this novel. I would have thought of something overly dramatic but it didn't. I kept thinking of Ewan McGregor as Philip and Katie McGrath as Rachel but in the actual movie, Sam Claflin was Philip and Rachel Weisz was Rachel LOL!!! It sure was a dark kinda story, neatly written in Philip's point of view. His narration was simply straight forward yet had that cliff hanger effect. It did made me wonder 'was she the murderer?' and 'how did she die?'. The way the story unfolds, though curious, led to that expected ending with a 'har?!!'

Well, I've truly enjoyed Daphne's gothic story-telling. It was realistic and memorable with such plotting. I've read quite a number of good reviews of her books including this so I'll definitely explore her other novels. I've always liked such mysteries to keep my reading enthusiasm up. This did reminds me of another novel, though different plot but with similarly gothic effect, Carlos Ruiz Zafon's Marina.
Email ThisBlogThis!Share to TwitterShare to FacebookShare to Pinterest
Sections: Books