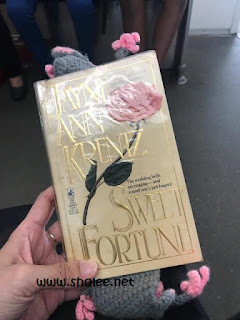 Everyone thought Jessie Benedict’s impending marriage to Sam Hatchard was a great arrangement—everyone, that is, but Jessie herself. Was she the only one who could see that Hatchard, her powerful father’s protégé, had a scheming ulterior motive in marrying her? He was more than just a chip off the old workaholic’s block—he was positively lusting after Jessie’s inheritance to build his own business empire! Free-spirited Jessie has plans for her own career as a detective—starting with the rescue of a teenage girl from a dangerous cult. But when a break-in and an intimidating act of vandalism strike close to home, her investigation pairs her with the compellingly masculine entrepreneur. Hatch does make her heart beat deliciously fast, but she’s not taking orders from any man. Imagine her surprise when he turns out to be not only a friend and ally, but a strong, tender lover who, in the end, knows how to seal a deal—with her resounding “I do!”

The first half was a little dull for me when both Jessie and Hatch were bickering about compatibility, business arrangement and the cult. When they have finally gotten together, it started to pace better and felt much more entertaining towards the end. Not forgetting, this one has the woman's stance much firmer with the guy following her tantrums more which was a good mix.

The earlier book was a much better read for me still. This one felt a little farce at times, especially since it's about the filthy rich and some scammed cult. At some point, the plots were predictable. Of course, it ends with the standard 'happily ever after'. All in all, it's entertaining lah!
Email ThisBlogThis!Share to TwitterShare to FacebookShare to Pinterest
Sections: Books