MPOV: The Sailor Who Fell from Grace with the Sea 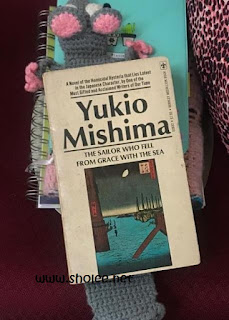 The Sailor Who Fell from Grace with the Sea tells the tale of a band of savage thirteen-year-old boys who reject the adult world as illusory, hypocritical and sentimental, and train themselves in a brutal callousness they call "objectivity." When the mother of one of them begins an affair with a ship's officer, he and his friends idealize the man at first; but it is not long before they conclude that he is in fact soft and romantic. They regard their disappointment in him as an act of betrayal on his part, and react violently.

There are 2 parts in this short novel. At first it's about a widow, Fusako, and her 13 year old son, Noboru. Fusako manages a well to do boutique after her husband passed away and takes care of the family overall. After 5 years of being a widow, she finally met a sailor, Ryuji, whom she really likes and started dating him. Noboru is an intelligent boy and is part of a secret gang in school. This group of boys liked to go to a secret hideout to discuss their code of ethics. Unfortunately, they are quite incongruous with their livelihood and think of themselves as the honourable ones which led to unwanted killings to prove themselves worthy. So in part 2, it took on a more sinister turn after Ryuji proposed to Fusako........

When I first started the book, I find that it was written poetically fluid. Of course, this has been translated but thankfully it was not lost in translation. In fact, I've enjoyed the prose though I did not like the plots. After reading some reviews, I realised the reason for this gory plots. Yukio has his own incongruous thoughts and agenda. I think he was a little suicidal too as at the end, though he died in a supposedly honourable way, he had planned everything until the way he would die. Hence I do think that this novel was somewhat a reflection of his thoughts.

I have never felt so convulsive after reading a fiction. It sure does feel as though it was real, it had happened before, even though it could only be Yukio's imagination. Here, I've listed down some appalling moments that I totally could not comprehend so SPOILER ALERT!!!

I was somewhat appalled that a 13 year old who had accidentally found a peephole to his mother's room would continuously peeped on his mother! He saw everything from his mother's nakedness to her having sex with her lover! He even happily reported it to his secret gang on all the details!

When Noboru was asked to kill a kitten during a secret meeting with his gang, I did not think it would continue gruesomely. In fact, it had been detailed how they dissected and inspected the dead kitten's internal organs! EEW!!! 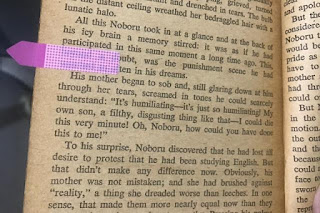 When Noboru called for an emergency meeting with his gang after his mother told him of her impending marriage with Ryuji, I totally did not expect them to actually planned on how to lure, drug and kill Ryuji! At this point, I was so shocked beyond words! They could even tabled the law that they are beyond 14 years old so they will not be prosecuted for the killing! I rest my case here.
.
.
.

Overall, it's a good read if you can stomach those evil plots. Twisted dark minds of 13 years olds, what more can I say. It could be the start of a bunch of serial killers! Definitely not for the faint hearted. I sure felt scarred for life LOL!


Glory, as anyone knows, is bitter stuff.