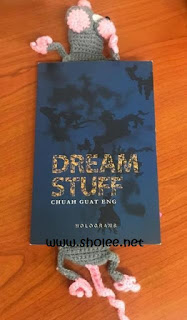 This book consisted of 12 short stories written between year 1992 to 2014. It's a mixture of characters and plots of all kinds but mostly based locally in Malaysia. From family related to singular ideal to space travel, some way back then yet some is current, so relatable and easily imaginable.

Overall, I've enjoyed all 12 stories. I do not have a particular favourite but I do have one which I liked the least and it happens to be the only science fiction namely Memoirs of an Aranean Harpist. I just couldn't grasped it and practically flipped over the pages more!

I liked how each story unfolds, how the author wrote and plot it overall. It was written fluidly with easy understanding yet with dramatic effects! Oh yes, some was kinda thriller and had me scared stiff! Definitely an easy read and can be finished in a day or two lah!

Below are some notable quotes:
The Stuff of Dreams
"Ya, so bad luck, picking up other people's rubbish first thing in the morning" said Sis-in-law.
"Precisely," I said, "bad feng shui."

Forbidden Fruits
"Thou canst not then be false to any man."

Poor Cousins
"He said we owe that family nothing, because we were only children whereas Uncle Pak and Aunty Poh  were adults and knew what they were doing."

A new word:
Her own mistress
Daguerreotypes - a photograph taken by an early photographic process employing an iodine-sensitized silvered plate and mercury vapour
Email ThisBlogThis!Share to TwitterShare to FacebookShare to Pinterest
Sections: Books