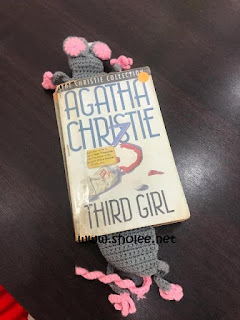 Third Girl is a work of detective fiction by Agatha Christie and first published in the UK by the Collins Crime Club in November 1966. It features her Belgian detective Hercule Poirot and the recurring character Ariadne Oliver.

Norma Restarick seeks help from Poirot, believing she may have committed murder. When she sees him in person, she flees, saying he is too old. He pursues the case finding that Ariadne Oliver sent Norma to him. He believes there is a murder that prompted Norma’s fears. Poirot and Mrs Oliver gather information, visiting her parents’ home and her apartment building. Norma does not return home after a weekend visit to her father and stepmother. Mrs Oliver finds her in a café by chance with her boyfriend David. Poirot meets Norma at the café, where she mentions the death again. After describing the odd times where she cannot recall what has happened she leaves in fear again. Mrs Oliver trails David, ending up in the hospital after being coshed on the head upon leaving his art studio. Poirot arranges for Dr Stillingfleet to follow Norma; he pulls her to safety from a close call with speeding traffic and brings her to his place for treatment and for safety.

Norma’s father Andrew abandoned her and her mother Grace when Norma was about 5 years old. Andrew had run off with a woman in a relationship that ended soon after. He travelled in Africa in financially successful ventures. Norma lived with her mother until Grace’s death two and a half years before. Andrew returned to England after his brother Simon died a year earlier, to work in the family firm, arriving with a new young wife. Norma can recognize nothing familiar in this man, but accepts him. Norma is the third girl in her flat in the fashion of young women advertising for a third girl to share the rent. The main tenant is secretary to her newfound father; the other girl, Frances, travels often for the art gallery that employs her.

I should say I did not enjoy this novel as much as it seemed to go round and round the same premise, having me so confused! I couldn't grasp as much and when it reached the final reveal, I was definitely taken aback as it was so unexpected! Who would have thought that such a confusing scenario would reached a confounding result. At the end, all is well with a good finished. Not one of her best but AC did her best to astound us with Poirot's capability!
Email ThisBlogThis!Share to TwitterShare to FacebookShare to Pinterest
Sections: Books