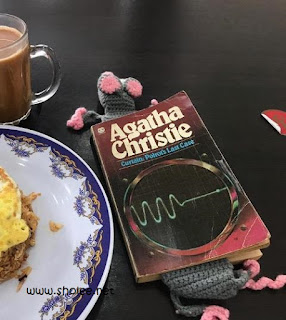 The house guests at Styles seemed perfectly pleasant to Captain Hastings; there was his own daughter Judith, an inoffensive ornithologist called Norton, dashing Mr Allerton, brittle Miss Cole, Doctor Franklin and his fragile wife Barbara , Nurse Craven, Colonel Luttrell and his charming wife, Daisy, and the charismatic Boyd-Carrington. So Hastings was shocked to learn from Hercule Poirot's declaration that one of them was a five-times murderer. True, the ageing detective was crippled with arthritis, but had his deductive instincts finally deserted him?

The novel features Hercule Poirot and Arthur Hastings in their final appearances in Christie's works. It is a country house novel, with all the characters and the murder set in one house. Not only does the novel return the characters to the setting of her first, The Mysterious Affair at Styles, but it reunites Poirot and Hastings, who last appeared together in Dumb Witness in 1937. It was adapted for television in 2013.

Oh wow! This is a good one! The tables turned and had me believing otherwise, deceiving me same as how Poirot had deceived Hastings. I just couldn't wait till the end which was so unexpected. I thought Poirot would fake his death but .................

I've not read all of Poirot's cases but I remembered enjoying it's TV series way back then. As such, it was easy to relate the plots and characters as Poirot was a definitive impressionable one. The plots written here was going round and round hence I got confused and couldn't guessed it this time. Plus that unexpected ending ..................

Hastings paragraph:
I don't want to write about it at all.
I want, you see, to think about it as little as possible. Hercule Poirot was dead - and with him died a good part of Arthur Hastings.
I will give you the bare facts without embroidery. It is all I can bear to do.

It sure was so sad the way it ended though in a good note. I guess Christie had a hard time letting Poirot go too since he's her true hero. This was definitely a good bittersweet plot to end a successful hero! Such a dominant yet familiar figure, I guess everything nice has to come to an end. Moving on to other Christie's books... yes, I'm on a AC roll here LOL!
Email ThisBlogThis!Share to TwitterShare to FacebookShare to Pinterest
Sections: Books