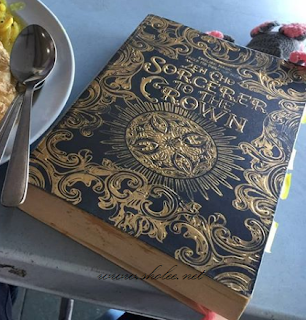 Magic and mayhem collide with the British elite in this whimsical and sparkling debut.

At his wit’s end, Zacharias Wythe, freed slave, eminently proficient magician, and Sorcerer Royal of the Unnatural Philosophers—one of the most respected organizations throughout all of Britain—ventures to the border of Fairyland to discover why England’s magical stocks are drying up.

But when his adventure brings him in contact with a most unusual comrade, a woman with immense power and an unfathomable gift, he sets on a path which will alter the nature of sorcery in all of Britain—and the world at large…

Finally, some interesting plots towards the end like when Mrs. Midsomer turns out to be a mermaid, a familiar of Mr. Midsomer passing off as his wife. I was able to finish reading this book then! From the beginning, I did find it a bore at some point when I just couldn't connect with the main characters i.e. Zacharias and Prunella. Their journey, their adventure seemed irksome to me until a plot twist towards the end too. I guess everything comes to live towards the end in this book.

Perhaps it's the prose, the way it was written in a very British Britain feels that got me off. I've read other novels from Zen Cho before and they were really good! So I wouldn't have thought this would be different. Maybe it being a Young Adult novel is not my cup of tea. I've always had issues reading YA novels so this could be the reason too.

That ending though... I had expected both to hit it off in the end but not in such a crude way! Zacharias truly isn't a lady's man though he did his fare share to save his maiden poorly. Prunella proved to be the stronger one, aside from her chatter self, I do like her character in the end. All in all, it's rather an entertaining book with a too slow at the start and too fast at the end pace. This is a good enough book 1 of a trilogy which I do hope the remaining 2 fare better. I'm not sure if I'll go for the others but never say never! When the time comes, I could devour all of it! LOL!


“Are you going? What shall you wear?"
"I shall go in what I am standing in," said Mak Genggang. "A witch is always appropriate whatever her attire.”

“It is a mother's duty to teach her daughters about the uses of blood, particularly a magical daughter.”