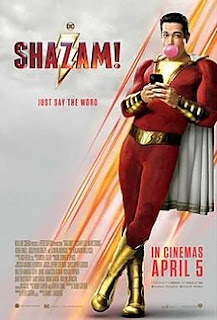 While playing with his Magic 8 ball, a young Thaddeus Sivana is magically transported to the Rock of Eternity, where he meets the wizard Shazam, who introduces him to the mystical statues containing the spirits of the Seven Deadly Sins: Pride, Greed, Lust, Envy, Gluttony, Wrath, and Sloth. The last of a council of seven, Shazam spent centuries searching for a new champion. Put to a test to see if he is pure of heart, Sivana attempts to touch the Eye of Envy, failing the test. When he is transported back to the car, he causes a scene when he tries to go back, causing his father to be injured.

In present-day Philadelphia, Billy Batson is arrested by child services after he lures and traps police officers to assist in his search for his mother. He is adopted by the Grazers, and he shares a room with Freddie Freeman, a paraplegic. Meanwhile, using testimonies by those rejected by Shazam, Sivana returns to the Rock of Eternity and frees the Sins, allowing them to use his body as a vessel to escape. With his power, he kills his father and brother for the abuse he suffered as a child.

While at school, Freddie is bullied by a group of kids. Billy intervenes and flees onto the subway, where he is summoned by Shazam. Shazam has Billy grab his staff and say, "Shazam!", which transforms Billy into an adult with multiple superpowers. With Freddie's help, Billy begins to learn the full extent of those powers. Freddie posts videos of Shazam’s powers, which go viral. However, after Freddie claims to know Shazam at school, he and Billy get into an argument at the dinner table over Freddie using Billy for his newfound powers. Billy begins to skip school to enjoy being Shazam, humiliating Freddie. Shazam accidentally causes a bus to fall off a bridge before saving it, causing Freddie to promptly reprimand him for abusing his powers. Upon seeing Shazam on the news, Sivana attacks him. Shazam is easily defeated, but he transforms back into Billy to blend into the fleeing crowd. However, Sivana captures Freddie, who was looking for Billy.

Overall, it was witty and funny so definitely entertaining. However, it did lacked something for me, somehow missing that oomph! Though it's family oriented but with some vulgarity in it. Maybe I was just too tired to fully immersed in the movie but I did enjoy the funny puns.

So just to say it is an entertaining superhero movie with lots of action and family hits + misses + hugs! Great casts, no doubt about that with realistic and superlative CGIs. There are 2 post credit scenes so just stay back to watch it as it does lead to a sequel though no dates have been confirmed as yet.
Email ThisBlogThis!Share to TwitterShare to FacebookShare to Pinterest
Sections: Movies