MPOV: The Murder at the Vicarage (Miss Marple #1) 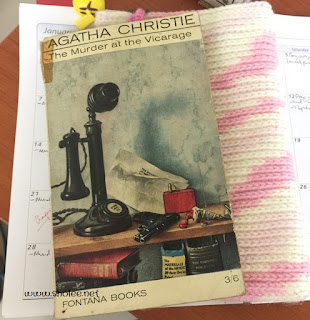 Murder at the Vicarage marks the debut of Agatha Christie’s unflappable and much beloved female detective, Miss Jane Marple. With her gift for sniffing out the malevolent side of human nature, Miss Marple is led on her first case to a crime scene at the local vicarage. Colonel Protheroe, the magistrate whom everyone in town hates, has been shot through the head. No one heard the shot. There are no leads. Yet, everyone surrounding the vicarage seems to have a reason to want the Colonel dead. It is a race against the clock as Miss Marple sets out on the twisted trail of the mysterious killer without so much as a bit of help from the local police.

My first read of the year and Miss Marple it is! It has been entertaining thus far. Truly a remarkable story with the typical Agatha Christie's style and a twist towards the end. Expect the unexpected, yet it's there right in front of us. I liked how Christie presented the murderer on a silver platter, so to speak LOL!

Though it's narrated by the Vicar, Miss Marple slowly inched into their lives, solving the murder mystery in the end. A nice way to intro the protagonist and yet she's not the main character, only observed by a third party. It's such an interesting approach.

I'm just glad that though it was written in the 60's, the prose and plot are still relatable and easily understood. Unlike some other classics, this turned out to be a good read.

There were some repetition of this phrase 'Peculiar Thing' so it got me wondering if Ransom Riggs had his inspiration after this book...

Ending this review with a notable quote: