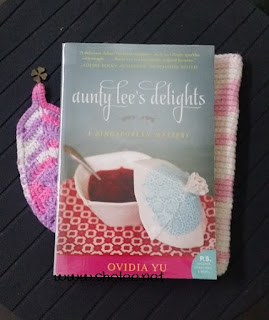 Aunty Lee's Delights is the first book in the Singaporean Mystery series by Ovidia Yu. It's about Rosie Lee, a widow, who owns a successful restaurant serving local cuisines aptly named Aunty Lee's Delights. A woman has been found murdered on Sentosa Island and it has piqued Rosie's interest especially when the murderer is still at large. Together with her maid Nina, Rosie helped the police unravelled the truth with her unique recipe way catching the murderer in the end.

Initially it was written with much guarded, perfected, on the dot of the English language making it quite dull. As the story progresses, when the plot begins to thicken, the perfect pace naturally loosens which made it a more bearable read. Ovidia's prose may not be as entertaining but she managed to get her story across in an enthralling way.

It is my first Singapore read but I couldn't helped compare this to Miss Marple. I've recently read Agatha Christie's A Murder at the Vicarage and the similarity between Aunty Lee and Miss Marple were quite obvious. Both were elderly women, both enjoyed being detectives, both quite observant so I wonder if Ovidia had gotten her inspiration from Miss Marple. Thankfully the solving methods were different so it's quite refreshing when Aunty Lee had it down in recipe format.

I must say, I am surprised by the enjoyment factor, though not a wow read but a good one nevertheless. Not forgetting it's so relatable since it's Asian and I could easily imagined it while reading. With the many interesting plots which I'll not be a spoiler here, I'm glad to have discovered this Asian author and if it's not for the Reading Women Challenge 2019, I wouldn't have picked this book up.

Moving on to the next challenge:
2. A book about a woman with a mental illness

Unfortunately, I've read Alice Sebold's Lucky, listed as one of many in this category. After some searches, I've finally settled on Before I Go To Sleep by S.J. Watson. I've not watched the movie yet, though it has my favourite Nicole Kidman, so hoping it's a good one.

To end this, some notable quotes from Aunty Lee's Delights:
Frank Cunningham nodded. He knew the type. "I'm okay with women dressing to please themselves. That said, some girls today forget there is also the need ti dress appropriately because of how others will see you. Otherwise they'll just attract sex predators and perverts."

Aunty Lee thought Carla Saito and Marianne Peters would very likely have married - and had a happy marriage - if they could have done so. Things were changing. They just had not changed fast enough for Marianne Peters. That, however, was not the issue inside Nina's head. But what went on between Marianne and Carla was no more Nina's business than Nina's beliefs were Aunty Lee's. She has heard Nina's attitude before, though expressed by other people and directed at other targets. The 'desperate decency if the respectable poor' held true at all levels.

"I believe God gave us brains and logic because He wanted us to learn to use them." Aunty Lee smiled.

"Pig's foot," Aunty Lee said sweetly. "You want to know what human beings taste like, all you have to do is eat pork." She lifted a chopper and expertly whacked the long, pale-skinned leg. "Very sweet. You and the pig are both red meat. Your muscles about the same size. You eat your junk food, the pig eats what is left over from making your junk food, so same taste, same texture, only difference is your meat is juicier."

As Aunty Lee always said, you can't cut out bad memories without removing part of your heart, but you can always create good memories to override them.
Email ThisBlogThis!Share to TwitterShare to FacebookShare to Pinterest
Sections: Books