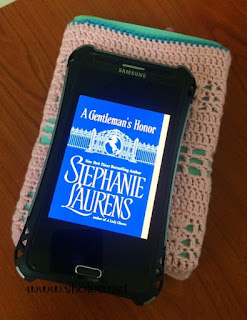 This is book 2 of the Bastion Club series which centres on one of the eligible bachelors, Anthony Blake who is Viscount Torrington. Having met Alicia Carrington in an unusual way, he seemed taken with her and always finding ways to be of her acquaintance. Alicia, on the other hand, is too busy launching her sister into the ton by masquerading as a widow. Embroiled in a murder mystery, Tony took the opportunity to deepen their friendship and eventually led Alicia to being his lover. Alicia has more to lose especially with her being a fraud in the ton and her family penniless. Her only hope is for her sister to marry well before she quickly goes into hiding and leaving even Tony behind!

This is my first Laurens and I've thoroughly enjoyed it overall. She wrote it astride with the regency's customary prose. BUT at the start, I did find Alicia's indecisive 'Tony... Torrington' paraphrase annoying! Thankfully it stopped and midway onward, the story was more bearable with the much anticipated ending. There were some flaws here and there but overall an entertaining read.

I can never understand though at the start why Tony is fully clothed while Alicia is near naked during their sexual tryst. I just felt it a little unfair, I know it's just a novel but always portraying female naked whilst the male counterpart is fully clothed annoys me! When they are finally in a bedroom, then the male counterpart gets naked, jeez! This is not the first one I've encountered ya...

Anyway, as with most romance novels, it may be predictable at times as we were lead in one direction but it was creatively plotted and turned the other way which I did find entertaining. Nicely written, now I'm hoping to read the rest of the Bastion Club's series.

Here are some of the snippets which boggled me: 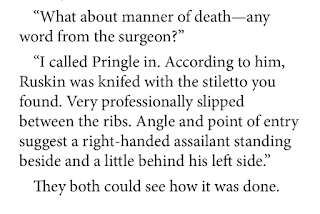 Stiletto - I kept imagining it as a women's high heel shoes. Didn't know it's also another word for knife. 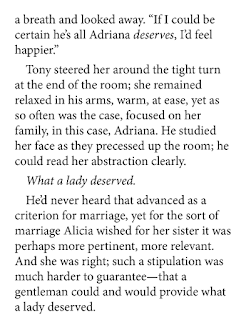 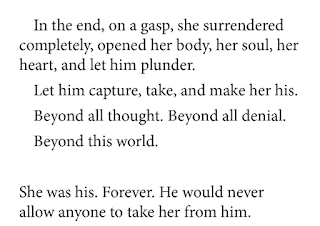 A new word in my book:
Escritoire - a small writing desk with drawers and compartments
Email ThisBlogThis!Share to TwitterShare to FacebookShare to Pinterest
Sections: Books