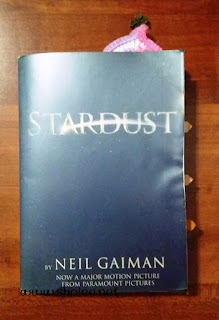 Finally reading this book after having watched the movie many times! It's an easy read with a fairy tale prose, well written Gaiman style.

Life moves at a leisurely pace in the tiny town of Wall—named after the imposing stone barrier which separates the town from a grassy meadow. Here, young Tristran Thorn has lost his heart to the beautiful Victoria Forester and for the coveted prize of her hand, Tristran vows to retrieve a fallen star and deliver it to his beloved. It is an oath that sends him over the ancient wall and into a world that is dangerous and strange beyond imagining.

As much as I wanted to love the book itself, I find that the movie version was way much better compared to the book. The story itself was more fluidly transpired in the movie and the ending itself was what I've preferred.

Movie aside, the book was written with great care from start to end. If I've not watched the movie, I think I would have liked the book itself although I did not enjoy the ending much. It does give me the impression that it has been placid for the younger readers as such it seemed unadventurous or unexcited. Oh well, different people have different taste so who knows, you might liked it better than me!

A quote which I've liked:

“She says nothing at all, but simply stares upward into the dark sky and watches, with sad eyes, the slow dance of the infinite stars.”