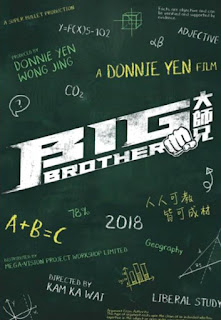 A soldier-turned-high school teacher uses unusual methods to reach to a class of poor students, while dealing with a greedy entrepreneur and his gang of fighters as well as the government.

The above taken from IMDb.

Recently watched this unexpectedly entertaining movie which totally reminded me of Dangerous Minds starring Michelle Pfeiffer. Though the plots may differ, the gist of it is similar and both were truly touching in the end.

Big Brother was more relatable as it's Asian with a number of young new casts who were quite impressionable. Donnie Yen, being the main lead, did influenced the movie more with his butt-kicking, handsome charisma but then it did wane off eventually. The variety of casts made it more engaging with their various antiques.

The plot itself was genuinely refreshing from the previous gangster's theme lame story line. This one touches more of the social ills currently impacting students. Also highlighted more about life, about family responsibility, about living meaningfully... especially since we only live once.

So much so that I do believe Malaysian teachers and students MUST watch this movie!!! It's definitely eye-opening especially since Malaysians are so backward yet think they are so forward. As the saying goes 'Money in your pocket' for sure!
Email ThisBlogThis!Share to TwitterShare to FacebookShare to Pinterest
Sections: Movies