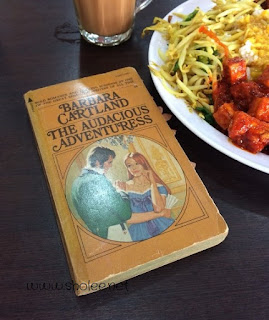 When Valdo, a Marquis, stumbled upon Druscilla, it was two long lost distant cousins reunited under odd circumstances. Nothing has prepared both of them of their future when they had been forced to marry by the Duke upon discovering the Duchess' philandering ways with Valdo. After their hasty marriage, Valdo has to present Druscilla to the society as the new Marchioness and he's in a rut on how to do it without losing his pride. Druscilla had the perfect plan, with Valdo's grandmother's help, together they had deceived the society and became the talk of the town!

I can't get over some plots which were deemed right back then but wrong now. How times have changed and evolved! I would have liked the formality back then but it does seemed high-handed and aloof. Anyway, here are some of my thoughts...
1. Druscilla has suffered much in life after her father has passed away. Living in poverty and hardship in getting a permanent work, she finally found her long term solution in Valdo's sudden proposition. In current days, Druscilla would have been seen as a gold digger LOL! Her untoward incident with a certain Dirty Old Man would have been classified as sexual harassment and rape, unlike those days where the victims (usually maids or servants) had to live with it and everything swept under the rug.

2. I cringed a little when Valdo's egoistic character takes a swipe at Druscilla's drab initially but eventually over coming it all after her beautiful transformation. That is so sexist! Somehow the knight in shining armour has become a dickhead!!! Then again, this was way back when such pride is allowed *rolled eyes*

3. Not forgetting that both Druscilla and Valdo were long distant cousins getting married, though it's common back then but it is frown upon now.

I have not read classic historical romance ever so this is my first and it's giving me happy, exciting thrills overall! This book pretty much felt like a Cinderella story with, of course, a Happy Ever After ending. With not much unnecessary sex plots, it's filled with tender, sweet moments of innocent love and some drama to peak the story up. It's definitely a breath of fresh air and it did keep me wanting to finish it soonest - wondering what Eustace would do in the end; how Druscilla and Valdo would rekindle - although it was somewhat predictable.

The prose was a little difficult to get by at times. Well it's written in the 70's so can't complain much here. TBH, it's truly entertaining and I'm amazed with Barbara Cartland's imaginary romantic plots. At times, it does seemed funny, like the below which I've screen captured: 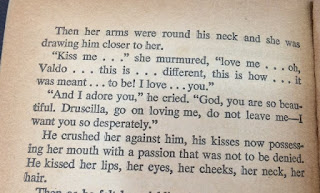 This book is for those who wants a quick and easy romantic read :-)
Email ThisBlogThis!Share to TwitterShare to FacebookShare to Pinterest
Sections: Books