MPOV: Since I saw you (Because you are mine #4) 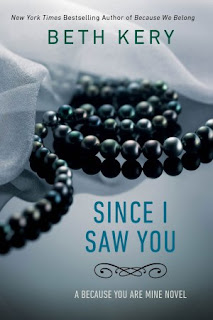 When enigmatic billionaire Ian Noble sets Lin the task of ‘taming’ his brilliant, yet half-savage brother Kam Reardon, she eagerly accepts. She’s more than curious about the solitary genius and everything she’s heard about him. During their electric first meeting, her fascination increases a hundredfold. Kam practically oozes raw sex appeal. Lin is interested…very interested. But does her intense attraction and willingness to go places with him she’s never gone before in the bedroom really have to do with Kam? Or is her carefully hidden desire to blame for a man she knows she can never have?

The above taken from www.bethkery.com

Finally reading this last book, I find that the depth of the story is a little shallow and not as romantic as before. It's a leap and bound thing where Lin and Kam just devour each other the first time they met and continuous sex without much plot. When it finally reached towards the ending then something predictable happened and somehow you'll know how it ends. Not much of a rara here...