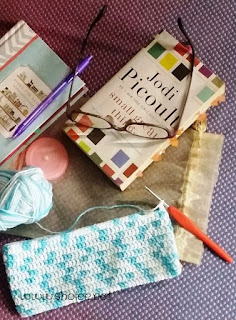 Ruth is living her dreams. She's working as a neonatal nurse, has a straight A's student son in a prestigious school and staying in a good neighbourhood. However, all of that changed when a newborn baby died in Ruth's hands. Her license has been suspended pending a murder trial. Her future has been shattered because of the dead baby's parents who are charging her with murder.

Turk and Brittany, the dead baby's parents, are white supremacists who had stated clearly that they do not wished to have any African American nurses to tend to their baby. Naturally Ruth, who is black, is enraged when she heard about it but let it go since there are other babies in need of her expert care. When this baby was in distress and Ruth was the only nurse available, she's stuck... to touch or not to touch? Should she try to save the baby or should she stand at the side and wait for her supervisor?

This book speaks volume. The characters and plots in this book are so relatable especially in the current livelihood everywhere. Racism is rampant but most people would still try to deny it even though it's right in front of them. Ruth's unfortunate incident is just a matter of being at the wrong place at the wrong time. However, she's still the target set by Turk and Brittany just because she's black.

We may be living in a world of pretence and denial but we can't run away from facts. Just because I'm Chinese, it doesn't mean that I'm from China nor I can speak Mandarin. There are so many Chinese people from around the world and there are so many dialects in the Chinese community. I'm Malaysian Chinese and I speak Hokkien/Cantonese, does this make me less Chinese and less human? Not forgetting, we are not supposed to judge people but it seemed that this moral is lost in evolution.

I am thoroughly in awe with this book. It was truly engaging from the start and filled with many twists and turns, leading it to an unexpected ending. Who would have thought this was written by a white author? The demeanour it was written with the many slang intertwined did surprised me as I can actually imagined the whole story! Octavia Butler is perfect as Ruth with Edward Norton as Turk and Stephanie March as Kennedy. Definitely a book worth reading, word by word, with it's perfect plots and melancholy set-up.

Jodi Picoult must have done a huge and thorough homework on this, digging relentlessly and plotting until the whole story is complete. I can also feel that it was planted and phased meticulously for the desired effect which was not an easy feat, especially since it involves people of colour. Though I'm not a fan of court drama in books, I can totally grasped Jodi's version which was very straightforward with less fancy words and I can absorbed the severity of the story. It's definitely written with much thought and care that turned out to be dramatically entertaining for me.

If you are a sensitive reader and find racism uncomfortable, this book is not for you. You would require to read this with an open mind and do not be judgemental. Even though it's fiction, it does touch a part of our livelihood so please read with care.

There were many notable quotes but I've listed here the few which touched me:-
"Baby," my mama said, "it's not easy for a Black girl to want. You have to show them you're not a Black girl. You're Ruth Brooks." She would squeeze my hand. "You are going to get everything good that's coming to you - not because you beg for it, and not because of what color you are. Because you deserve it."

This is what's so upsetting to me about the incident at the hospital: I'm known as the fixer, the one who figures out a solution. I'm not the problem. I'm never the problem.

That's just what they want: for you to doubt yourself. As long as they can make you think you're not worthy, they still got you in chains.

"Then why pretend?"
"Because it's what lawyers do. I lie for a living. If I thought it was going to get you acquitted, I could tell the jury that Davis Bauer was a werewolf. And if they believe it, shame on them."

Ruth looks at me. "I'd rather they think I'm a liar than a murderer."
Email ThisBlogThis!Share to TwitterShare to FacebookShare to Pinterest
Sections: Books