MPOV: Ant-Man and the Wasp 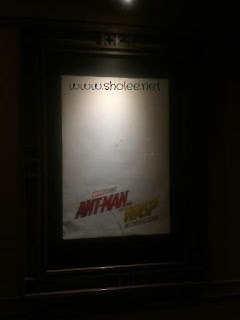 In 1987, Janet van Dyne / Wasp shrinks between the molecules of a Soviet nuclear missile, disabling it but becoming trapped in the microscopic quantum realm. Hank Pym / Ant-Man raises their daughter Hope assuming that Janet is dead. Years later, former criminal Scott Lang takes up the mantle of Ant-Man and discovers a way to both enter and return from the quantum realm. Pym and Hope begin work on repeating this feat, believing they may find Janet alive. Lang and Hope also start a romantic relationship and begin training to fight together as Ant-Man and the Wasp, until Lang secretly helps Captain America during a skirmish between the Avengers in violation of the Sokovia Accords. Lang is placed under house arrest, while Pym and Hope go into hiding and cut ties with Lang.

Two years later, Pym and Hope briefly manage to open a tunnel to the quantum realm. Lang receives an apparent message from Janet, who he is quantumly entangled with. Despite having only days left of house arrest, Lang decides to call Pym. Hope kidnaps Lang, leaving a decoy so as not to arouse suspicion from FBI agent Jimmy Woo. Seeing the message as confirmation that Janet is alive, Pym and Hope work to create a stable tunnel so they can take a vehicle to the quantum realm and retrieve Janet.

Hope arranges to buy a part needed for the tunnel from black market dealer Sonny Burch, but Burch has realized the potential profit that can be earned from Pym and Hope's research and double-crosses them. Hope fights Burch and his men off, until she is attacked by a quantumly unstable masked woman. Lang tries to help fight off this "ghost", but she escapes with Pym's portable lab.

Watching this movie in Phuket was a pleasant experience as the movie-goers were civil with good manners... no rude shaking chair from behind nor extra narrators talking loudly. With the comfy cosy seats, I've truly enjoyed this movie from the start to the end!

Overall, it's totally hilarious! The plots, aside from action-packed CGI, were written with one end result in mind... to ENTERTAIN! It may not seemed perfect but it was entertaining from the start to the end of the movie. With Paul Rudd's straight face, it was unbelievably funny when he became someone else! Also, Michel Pena's character, though seemed dull, was actually funny in it's own quirky way! The characters totally blend in together and formed this awesome movie!

It's a movie worth watching with the family (aged 13 years and above ya) in the cinema. I've even watched it twice and I did enjoy it more the second time!

PSA: there are 2 post credit scenes ya so make sure you stay till the end which is related to Infinity War :-)
Email ThisBlogThis!Share to TwitterShare to FacebookShare to Pinterest
Sections: Movies