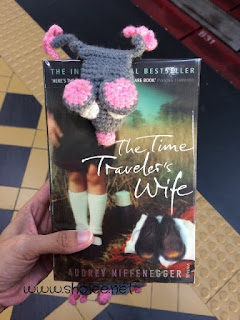 An epic love story of a time traveler, Henry, and a artist, Clare, who have to endure so many challenges, so many hurdles just to be together, if not forever. From the moment they met, when Clare was 6 and Henry was 36, they have been fated to eventually be married. However, the path to the end in mind took a lot of grooming by Henry, preparing Clare for the future with the eventual that Clare will lead Henry when they meet in their current time.

Clare has the notion that Henry is her soulmate from day 1 and has been preparing for the day she'll meet the current Henry. Together with her best friend, Charisse and her husband Gomez (who is secretly in love with Clare), Clare was able to overcome the many obstacles and hindrance faced with Henry's off and on persona.


Henry says, "Whatever happens, we both know that I live to be at least 43. So don't worry about it."

Their undying love made this whole book so sadly beautiful! Especially since they sort of knew when Henry would die (as hinted above), their difficulty of having a baby and the many miscarriages before succeeding with Alba, their irregular lifestyle. They have gone through it all, just because they wanted to live a normal life. And when Alba appears (as per below quote), it sort of made the whole story complete!

To be honest, I nearly bailed at the start of the book as, though the story goes back and forth with either Henry or Clare's views efficiently non-stop, it was really frustrating and annoying not having the plots clearly defined plus kinda dragging at times. After some encouragements from my book club members, I've finally prevailed and finished it! Definitely a worthwhile effort to grasps and embrace the story plus now I understand the necessary back and forth. It was indeed well written with clarity or it would have been a messy plot ya!

There was a glitch though, not sure if it was intentional, from page 10 and 18 where Henry mentioned his door locks. At first, it was 17 locks then 37 and then it became 107 locks! I wonder why...

Highlighting this quote just because it mentioned a book which is currently popular:


When I open the door, I find Henry supine on my bed reading A Wrinkle in Time.

Some new words:
Hejiras - an Arabic word meaning emigration or flight
Slovenly - untidy and dirty; careless
Enmeshed - cause to become entangled in something
After I've finished reading this book, it has left me with a melancholic feeling. That ending, though sad with a tinge of hope, does feel hollow and harrowing. Having to bring up Alba on her own while yearning for Henry to come and visit her, Clare sure is a very strong and brave woman from the start till the end. Gosh it was truly hard to finish it especially in the commute, trying to hold back my tears!
Email ThisBlogThis!Share to TwitterShare to FacebookShare to Pinterest
Sections: Books