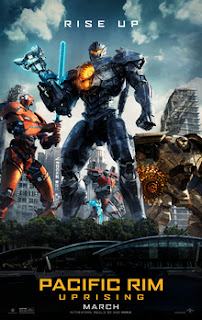 Ten years after the Battle of the Breach,[N 1] former Jaeger pilot Jake Pentecost—son of Kaiju War hero Stacker Pentecost—makes a living by stealing and selling jaeger parts on the black market. When he is arrested by the Pan-Pacific Defence Corps, his adoptive sister and PPDC commander Mako Mori gives him a choice between prison and returning to the PPDC as an instructor.

Upon arriving at the Hong Kong Shatterdome, Jake starts training Jaeger program recruits with his estranged former co-pilot, Nate Lambert. Nate and his sister reveal to him that the Jaeger program is threatened by Shao Corporation's drone program, which offers to mass produce remote controlled Jaegers developed by Liwen Shao and Dr. Newt Geiszler. The drone program combines Jeager technology with cloned Kaiju cells. Mako is due to deliver a final assessment to determine the authorization of the drones, but is killed by rogue Jaeger Obsidian Fury before she can report. Her death prompts the PPDC board to authorize the drone program and order their immediate deployment. In her last moments, Mako reveals the location of a defunct Jaeger production facility in Russia, which she suspects Obsidian Fury is using as a base of operations. Before Jake and Nate can investigate the area in their own Jaeger, Obsidian Fury destroys the complex and engages them in battle. Upon destroying its reactor, the two are shocked to learn that Obsidian Fury was controlled by a Kaiju's secondary brain, as are all of Shao's drones.

When the drones reach their respective locations, they simultaneously attack Shatterdomes worldwide, inflicting heavy casualties on the PPDC forces and incapacitating almost all Jaegers. Hermann Gottlieb seeks out Geiszler for help, unaware that Geiszler is the mastermind behind the attack, as he has been corrupted by regularly drifting with Kaiju brains. Seeking to destroy the world for the Precursors, the alien race who created the Kaiju, Geiszler has installed a backdoor in the drone program so that the Kaiju brains could take over the drones, destroy the PPDC and open new breaches all over the world. Although Shao is able to destroy the drones, three powerful Kaiju successfully emerge from the Breach and unite in Tokyo. The team realizes that the Precursors' goal is to activate the Ring of Fire by having a massive Kaiju fall into Mount Fuji, wiping out all life on Earth and terraforming the planet for their colonization.

This is so enthralling, engaging from the start until the end! In fact, I just didn't want it to end! Loved how the plot thickens and twisted in the end, though a bit predictable at times... it was expected lah to be dramatic. Overall, it was so realistic especially those evil Kaijus, great CGI works plus superb castings. Even though it was slightly different from the first but the basic gists of the Jaegers and Kaijus are there. I'm sure there is a continuation of this movie but not sure when.... can't wait for it though!
Email ThisBlogThis!Share to TwitterShare to FacebookShare to Pinterest
Sections: Movies