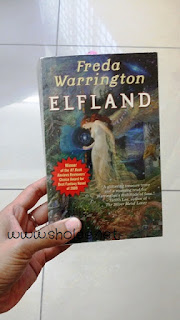 Rosie Fox is a daughter of the Aetherials, an ancient race from the Spiral—the innermost realm of the Otherworld—who lives secretly among us. Yet she and her kind are bereft of their origins, because on Earth, in a beautiful village named Cloudcroft, the Great Gates between worlds stand sealed.

Her parents, Auberon and Jessica, are the warm heart of Cloudcroft and of Rosie’s loving family. But on the hill lives the mysterious, aloof Lawrence Wilder, Gatekeeper to the inner realms of Elfland. Tortured by private demons, he is beset by trouble on all sides: his wife has vanished and his sons Jon and Sam are bitter and damaged. Lawrence is duty bound to throw open the Gates every seven years for the Night of the Summer Stars, a ritual granting young Aetherials their heritage, their elders vital reconnection to their source. Lawrence, however, is haunted by fears of an ever-growing menace within the Spiral. When he stubbornly bars the Gates, he defies tradition and enrages the Aetherial community. What will become of them, deprived of the realm from which flows their essential life force? Is Lawrence protecting them—or betraying them?

Growing up amid this turmoil, Rosie and her brothers, along with Sam and Jon Wilder, are heedless of the peril lurking beyond the Gates. They know only that their elders have denied them their birthright, harboring dark secrets in a conspiracy of silence.

When Sam is imprisoned for an all-too-human crime, age-old wounds sunder the two families…yet Rosie is drawn into his web, even as she fears the passions awoken in her by the dangerous Wilder clan. Torn between duty and desire, between worlds, Rosie unwittingly precipitates a tragedy that compels her to journey into the Otherworld, where unknown terrors await. Accompanied by the one man most perilous to her life, she must learn hard lessons about life and love in order to understand her Aetherial nature…and her role in the terrifying conflict to come.

I've not ventured into fantasy for a long time and I've bought this book due to it's fairy-like cover which has been 'calling' me for a while now. Finally started reading this book and it was no turning back! The plots were engaging from the start albeit confusing at first as I had difficulty grasping the many characters and backgrounds, tribes and realms. After a while, I got the hang of it and enjoyed the roller-coaster ride! The many characters maybe confusing but it added the depth needed for such an epic fantasy with a little romance. It wasn't as predictable yet the twisted plots were at times expected especially since I kept jumping towards the end just to know the ending LOL! I thoroughly enjoyed this enthralling book!

The funny thing is once I've started reading, immediately my mind envisioned Jason Momoa as Lawrence Wilder, Jack Black as Sam, Michael Gross as Auberon, Meredith Baxter as Jessica and Chloe Moretz as Rosie. The visionary flow was natural and it made the grasping much easier.

One thing is for sure, some of the characters and plots somehow reminded me of another fantasy fiction i.e. Twilight. It felt like a fanfic of Elfland with certain dramatic plots similar to Twilight but then Twilight was published in 2006. Others reminded me of The Golden Compass like the 'fylgia'. I guess fantasies can't run away much from each other since the tales and likes would intertwined eventually. Only the way it was written, the natural flow of the plots and the easily absorbed prose made the difference.

There are 2 more books in this Aetherial Tales series but they are standalones and not exactly a trilogy i.e. Midsummer Night and Grail of the Summer Stars. However, they are apparently out of print so thankfully I don't have to go hunting for it to know the subsequent ending LOL!
Email ThisBlogThis!Share to TwitterShare to FacebookShare to Pinterest
Sections: Books