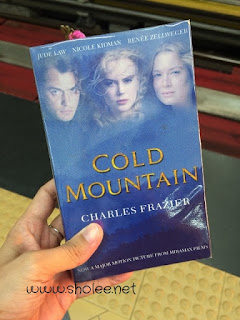 Cold Mountain is a novel about a soldier’s perilous journey back to his beloved near the Civil War's end. At once a love story & a harrowing account of one man’s long walk home, Cold Mountain introduces a new talent in American literature.

Based on local history & family stories passed down by Frazier’s great-great-grandfather, Cold Mountain is the tale of a wounded Confederate soldier, Inman, who walks away from the ravages of the war & back home to his prewar sweetheart, Ada. His odyssey thru the devastated landscape of the soon-to-be-defeated South interweaves with Ada’s struggle to revive her father’s farm, with the help of an intrepid young drifter named Ruby. As their long-separated lives begin to converge at the close of the war, Inman & Ada confront the vastly transformed world they’ve been delivered.

Frazier reveals insight into human relations with the land & the dangers of solitude. He also shares with the great 19th century novelists a keen observation of a society undergoing change. Cold Mountain recreates a world gone by that speaks to our time.

This is a difficult book to read. Firstly, it's written with a melodic prose, the Southern slang or twang so to speak. So I had to really digest what's written to understand the story correctly.

Secondly, it was plotted methodically with many incidents along the way. As such, there were many sub-plots leading up to the main, at times it made the story exciting, other times it actually was kinda dragging. From page 378 onwards, chapter: Footsteps in the Snow, the pace picked up and was more enthralling.

It was a beautiful, sentimental love story of Inman's difficult and long journey home to Ada. From Inman's to Ada's view of their past, how they have met and their predicaments during the war, so much happened within their courtship. The pace was at times so slow that I find it too dull. Definitely worthwhile for a movie which I have yet to watch but I can imagined the casts accordingly while reading it especially Inman - Jude Law and Ada - Nicole Kidman.


What I'm certain I don't want, she finally said aloud, is to find myself someday in a new century, an old bitter woman looking back, wishing that right now I'd had more nerve.

Some new words or slangs:
Katydids - bush crickets
Peepers - tree frogs
Clodpated - stupid, dull, doltish
Daguerreotype - a photograph taken by an early photographic process employing an iodine-sensitized silver plate and mercury vapour
Whorls - a small wheel or pulley in a spinning wheel, spinning machine or spindle
Calotype - an early photographic process introduced in 1841 by William Henry Fox Talbot, using paper coated with silver iodide
Naphtha - a flammable oil containing various hydrocarbons, obtained by the dry distillation of organic substances such as coal, shale or petroleum
Shoat - a young pig, especially one which is newly weaned
Harquebus - an early type of portable gun supported on a tripod or a forked rest
Nacre - mother-of-pearl
Bivouac - a temporary camp without tents or cover, used especially by soldiers or mountaineers
Deputation - a group of people appointed to undertake a mission or take part in a formal process on behalf of a larger group

Lastly, I'm surprised another male author has written a well-deserved accolade romance book. Aside from the above thoughts, I was excited when I've finally reached the part when Inman and Ada found each other again! However, that ending so reminds me of Nicholas Sparks' books... damn it! Why did that has to happen??? Anyway, the girl deserves a name...
Email ThisBlogThis!Share to TwitterShare to FacebookShare to Pinterest
Sections: Books