MPOV: While My Pretty One Sleeps 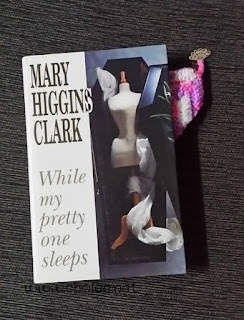 THE DEAD WOMAN WORE RED...
Gossip columnist Ethel Lambston knew everything about everybody who was somebody---so there were more than enough suspects in her murder. But for Neeve Kearny, owner of an expensive Madison Avenue boutique, the killing of one of her best customers had eerie echoes of another death that occurred many years earlier---the murder of her own mother. Suddenly, Neeve is plunged into the mystery of Ethel Lambston's murder, following a trail that leads from the glittering pleasure palaces of New York's rich and beautiful to the Mafia underworld. In the tradition of Mary Higgins Clark's staggering bestsellers, Neeve Kearny is a woman determined to find the truth, caught in a swirl of money and romance---and stalked by a killer who's closer than she could ever dream...

This is my first Mary Higgins Clark and it's mostly monotonous for me. Another Diva channel kinda story which has a long intro for how the characters come together - from Neeve to Myles to Sal to Jack to Nick - until when Kitty accidentally discovered Ethel Lambston's dead body. Then the pace picked up, accelerating in fact, to find out who's the killer. The plot twist was a breath of relief but then it ended as abruptly as it has appeared. And then the story ended.

Overall, it was an entertaining read as it was well written but the plot and the twist could have been better. Maybe I've expected more thus the disappointment I've experienced towards the end. Expect the unexpected and then finito.

Also, funnily enough, my hard cover copy had a few pages where the prints had blanked out as per below: 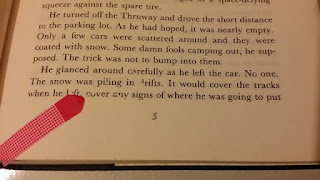 A couple of memorable quotes:


A pigeon in the house is a sign of death.

Wish evil to someone else and evil will come to you.

Some new words for me:
Panhandling - beg in the street
Wino - a person who drinks excessive amounts of cheap wine or other alcohol, especially one who is homeless
Plebeian - a commoner
Genuflecting - show deference or servility
Tonsures - a part of a monk's head left bare on top by shaving off the hair
Email ThisBlogThis!Share to TwitterShare to FacebookShare to Pinterest
Sections: Books