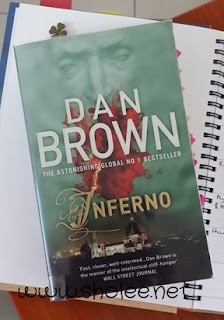 In his international blockbusters The Da Vinci Code, Angels & Demons, and The Lost Symbol, Dan Brown masterfully fused history, art, codes, and symbols. In this riveting new thriller, Brown returns to his element and has crafted his highest-stakes novel to date.

In the heart of Italy, Harvard professor of symbology Robert Langdon is drawn into a harrowing world centered on one of history’s most enduring and mysterious literary masterpieces . . . Dante’s Inferno.

Against this backdrop, Langdon battles a chilling adversary and grapples with an ingenious riddle that pulls him into a landscape of classic art, secret passageways, and futuristic science. Drawing from Dante’s dark epic poem, Langdon races to find answers and decide whom to trust . . . before the world is irrevocably altered.

Overall, I've only enjoyed the last 30% of the novel. I noticed that each time I read a Langdon, I tend to yawn non-stop. This is especially so at the start when the protagonist always explains stuff in detail and at times long winded. Even with this book, where Langdon started running from the start with the plots a little enthralling at times, I still yawn... jeez!

Some plots were predictable except for some twists towards the end that made up for the rest of the book. The good thing about this is that each characters played a distinct role which truly made a good book. Unfortunate for me who can't take 'long descriptions' well, it got me off the plots, had me speed read a little so that I can reach the parts that were less 'lengthy' and more exciting!

For example: when Sienna helped Robert at the start, I did have my doubt... 'Sure ah? So conveniently helping him... hmmm'. And then, it was revealed of the true nature of Sienna's helpfulness! The clever part was the code name FS 2080 where I was led to think it was Ferris but it turns out differently! That was part of the enthralling 30% LOL!!!

Anyway, this is so relatable I had to share: 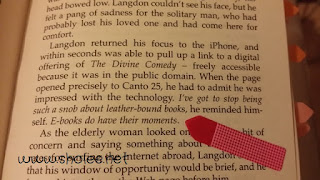 
"The decisions of our past are the architects of our present."

"Remember tonight, for it's the beginning of forever."

Some new words for me:
Chthonic - relating to or inhabiting the underworld
Crenellated - provide (a wall of a building) with battlements
Machicolated - provided with machicolations - a floor opening between the supporting corbels of a battlement
Eidetic - relating to or denoting mental images having unusual vividness and detail, as if actually visible
Agathusia - benevolent suicide
Avarice - extreme greed for wealth or material gain
Proclivity - a tendency to choose or do something regularly
Fecundity - the ability to produce an abundance of offspring or new growth; fertility

Transhumanism (abbreviated as H+ or h+) - the belief or theory that the human race can evolve beyond it's current physical and mental limitations, especially by means of science or technology.

Theories of Darwin (Darwinism) - is a theory of biological evolution developed by the English naturalist Charles Darwin and others, stating that all species of organisms arise and develop through the natural selection of small, inherited variations that increase the individual's ability to compete, survive and reproduce.
Email ThisBlogThis!Share to TwitterShare to FacebookShare to Pinterest
Sections: Books