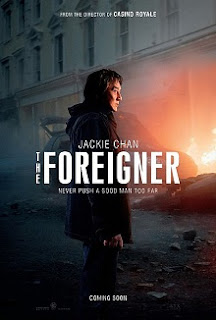 
Ngoc Minh Quan, a Chinese Nuang chef, runs a Chinese restaurant in London. When his teenage daughter Fan is killed in a clothing store bombing claimed by a group calling themselves the "Authentic IRA", a distraught Quan seeks revenge. He first attempts to bribe Scotland Yard officer Richard Bromley for the names of the bombers, but Bromley refuses to accept the bribe nor reveal any information. Quan next focuses on the Northern Ireland deputy First Minister Liam Hennessy, who speaks publicly about his status as a former IRA leader while condemning the bombing. Keyi Lam, Quan's co-worker and personal friend, attempts to console and convince him to move on, but he refuses to be swayed and eventually leaves for Belfast to meet Hennessy. Hennessy claims to have no knowledge of the bombing or its perpetrators, but Quan does not believe him. His queries escalate until he becomes fixated on Hennessy, setting off a homemade bomb in his office and threatening more unless he gets the bombers' names.

The truth is that Hennessy, while having ordered the bombings to come with warnings as part of a political ploy to solidify the radical factions, does not actually know who the bombers are, as they are rogue members of the IRA. He is in fact outraged that no warnings were given and civilians were killed. Hennessy tries to identify the bombers by changing the code words they use after any bombings are carried out, but the rogue members catch on and outwit him. Meanwhile, he sends numerous mercenaries and personal enforcers after Quan, who manages to escape or defeat all of them. He also observes Hennessy meeting with his mistress, Maggie, and takes a picture of them kissing. Quan then brings the fight to Hennessy, hiding in the woods outside his Belfast farmhouse and attacking it with more homemade bombs. As Hennessy's men attempt to track him in the woods, Quan uses traps to disable a group of three and attempts to interrogate one of them, but he is shot in the shoulder by a fourth mercenary and flees. Hennessy decides to send for his nephew Sean Morrison, who was part of the Royal Irish Regiment with Bromley, after Quan in hopes that his tracking skills can be used to stop him for good.

As Quan heats up a knife to cauterize the gunshot wound, he faints and has flashbacks of his escape from Vietnam to Singapore where he and his family are attacked by Thai pirates. He and his wife look on hopelessly as his two daughters are taken away, to be raped and murdered by the pirates. As he tried to fight off the pirates, he and his wife were shot and both fell overboard. His wife later died giving birth to their daughter, Fan. Hennessy receives files from the British government on Quan's true background: a former Vietnam War special operations forces soldier who was trained by the US army.

Jackie Chan definitely looks older befitting the role but the fighting scenes are much slower and not as exciting anymore. Thankfully, though the storyline is predictable, the plots were quite engaging with Pierce Brosnan's commanding character and Jackie Chan's persisting character. It's kinda slow at times but overall, an enthralling and entertaining movie to watch.
Email ThisBlogThis!Share to TwitterShare to FacebookShare to Pinterest
Sections: Movies