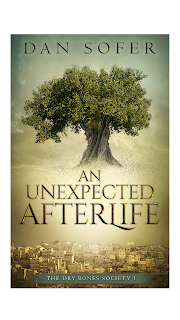 YOU ONLY LIVE TWICE.

Moshe Karlin wakes up one morning, naked and alone, in the Mount of Olives Cemetery. According to his family and friends, he died two years ago, but Moshe is not about to accept his demise lying down.

Is his new lease on life a freak of nature or the start of the long-awaited Resurrection? Moshe doesn't really care. He vows to beat his "afterlife crisis" and win back his life-and his wife-if it is the last thing he does.

But the road ahead is full of unexpected dangers. Along the way he gains insight into life, love, and the Jewish State, as well as the suspicion that perhaps his perfect first life was not so perfect after all.

Meanwhile, other changes are afoot in the Holy Land. A reluctant prophet prepares to deliver a message of redemption-and the end of life as we know it-when a freak accident changes the course of history.

Readers who enjoy the satire and humor of Kurt Vonnegut, Carl Hiaasen, Terry Pratchett, and Douglas Adams will enjoy this intriguing and humorous mystery in the Jewish lore and legends of the Resurrection, the World to Come, and the Messianic Era.

The above taken from Goodreads. I have received this e-ARC in return for my honest review.

Firstly, I would like to apologise to Dan Sofer for my late review. I've actually received this many months ago but one thing led to another plus my tab crashed and I've been delayed in reading this book. Thousand apologies! Fret not, I've finally read it and ........ lo and behold, why didn't I start reading it sooner???!!!

I was definitely surprised by this book from the start to the end! A page turner, I didn't expect it to be so realistically engaging and enthralling. Though set in Jerusalem, the storyline was easily absorbed and imaginable. I did enjoy the journey and felt that it would make a good movie plot. I actually have Idris Elba in mind as Moshe Karlin and Salma Hayek as Galit LOL!

TBH, I did find it similar to some TV series I've come across but the gist of it, the plots differed. Perhaps it had inspired Dan to write this but Resurrection or not, this book can definitely evolved into an epic saga ala Terry Pratchett's Discworld! In fact, this is book 1 so I wonder how many books had Dan Sofer planned for The Dry Bones Society to continue.

A page from the book where Rabbi Yosef explaining the Resurrection: 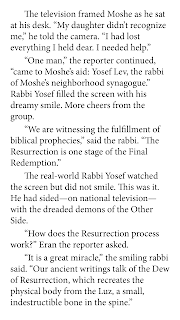 At some point, it may be a little predictable but then it changed it's course and the story twisted to another dimension. With so many characters involved, it was fluidly written as I didn't get confused or lost thankfully! Also the different pace, at times fast and at times slow, made it more enjoyable like a roller-coaster ride!

So I wonder, what is in store for book 2...
Email ThisBlogThis!Share to TwitterShare to FacebookShare to Pinterest
Sections: Books