MPOV: The Ocean At The End Of The Lane 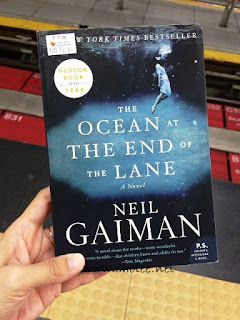 First of all, this author has been highly recommended in the bookclub (KLBAC) that I am in. I have started on American Gods but somehow, I could not finished chapter 1. As I was about to give up on this author, I thought why not give it another try since it came highly recommended. I found this book which happened to be slim, just right for my recent travel to HKG. Lo and behold, I have fallen in love with this book.

TOATEOTL is about a man who has returned to his childhood home after attending a funeral. He has not thought of his childhood in a long time and suddenly he thought of Lettie Hempstock, his only friend when he was 7 years old. After passing through his childhood home which was no longer there, he headed to the end of the lane where the Hempstock farm was, where Lettie used to stay. Surprisingly, the farm was still intact and the pond, which Lettie used to call the ocean, was still where it was. All the memories slowly flooding his mind, of his childhood friend Lettie, of their misadventure and how it ended then.

Although ambiguous at times, the story flowed seamlessly with the characters bringing me along their journey... a tumultous ride with the ups and downs keeping me on my toes! It somehow had me imagined that the man, the narrator, was Neil Gaiman and this is his story of his childhood, a particular one when he was 7. It was truly an entertaining read which I've enjoyed from the start to the end.

I so so so loved Neil's poetic prose which was melodically on point! Nothing long-winded, just precision and straight-forward, so easily absorded and imaginable. I just can't comprehend the fact that I was about to give up on him! Perhaps I should stick to his non-adult books for now LOL! An example of his poetic prose:


She had such unusual eyes. They made me think of the seaside, and so I called her Ocean, and could not have told you why.

Some new words for me:
Blancmange - a sweet dessert commonly made with milk or cream and sugar thickened with gelatin, cornstarch or Irish moss, and often flavoured with almonds. It is usually set in a mould and served cold.
Palaver - prolonged and tedious fuss or discussion.

And to end this review, I have attached an excerpt from the book which I find inspiring, which is relatable to us as readers: 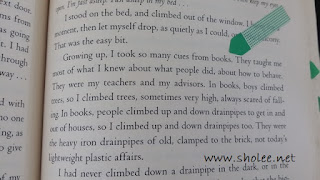