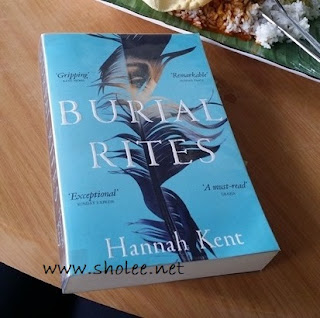 A brilliant literary debut, inspired by a true story: the final days of a young woman accused of murder in Iceland in 1829.

Set against Iceland's stark landscape, Hannah Kent brings to vivid life the story of Agnes, who, charged with the brutal murder of her former master, is sent to an isolated farm to await execution.

Horrified at the prospect of housing a convicted murderer, the family at first avoids Agnes. Only Tóti, a priest Agnes has mysteriously chosen to be her spiritual guardian, seeks to understand her. But as Agnes's death looms, the farmer's wife and their daughters learn there is another side to the sensational story they've heard.

Riveting and rich with lyricism, Burial Rites evokes a dramatic existence in a distant time and place, and asks the question, how can one woman hope to endure when her life depends upon the stories told by others?

I have never known how a person on death row feels. Though I can imagine it many times, I will never know the exact feeling or trauma that runs through the mind at the point of execution. Whether they are innocent or guilty, I believe the mindset would be the same. I truly applaud Hannah Kent for being able to visualise and portray, written it with immense details, all the seriousness and in-depth of this novel. It is definitely not an easy feat.

I can feel Agnes' sorrow, anguish and fear. It is such a sad, harrowing tale of a woman who has been wronged from the beginning just because she's different and poor. In current days, it would have been a manslaughter charge and not the death penalty, just to make an example of. I don't see justice here but double standard and hypocrisy. Agnes has been a strong woman, taking in all the negativeness and mistreatment from others in her stride, although she's afraid inside.

While reading this novel, I can imagine how the movie would be and who will act as Agnes in this haunting adaptation. But then, after Googling, I found out that there was a movie with Jennifer Lawrence as Agnes made in 2016. Hmmm... not sure if I could stomach the movie itself after finishing this novel. I'm still reeling in the heaviness of this tormenting novel. I felt like crying in the end but I can't as I was in a public area LOL!

Some memorable quotes and thoughts from the book:

From page 52:
As it says in the sagas, a witch often has fair skin.

From page 100:
Natan did not believe in sin. He said that it is the flaw in the character that makes a person.

From page 170:
Blondal believed 'She lied to my face in this very room'.

Just before Agnes died which really hits home:
You will be lost. There is no final home, there is no burial, there is only a constant scattering, a thwarted journey that takes you everywhere without offering you a way home, for there is no home, there is only this cold island and your dark self spread thinly upon it until you take up the wind’s howl and mimic its loneliness you are not going home you are gone silence will claim you, suck your life down into its black waters and churn out stars that might remember you, but if they do not they will not say, they will not say, and if no one will say your name you are forgotten I am forgotten.

Some new words:
Badstofa - a farm's living/ sleeping room, built in the late 19th century
Hovel - a small squalid or simply constructed dwelling
Lovage -  a large edible white-flowered plant of the parsley family
Skyr - an Icelandic dish consisting of curdled milk
Gaolhouse - a prison
Fetter - a chain or manacle used to restrain a prisoner, typically placed around the ankles
Saltpetre - another term for potassium nitrate
Email ThisBlogThis!Share to TwitterShare to FacebookShare to Pinterest
Sections: Books