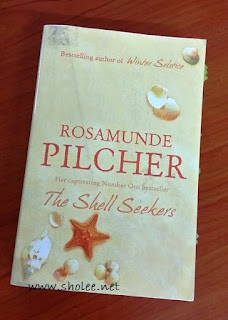 At the end of a long and useful life, Penelope Keeling's prized possession is The Shell Seekers, painted by her father, and symbolizing her unconventional life, from bohemian childhood to wartime romance. When her grown children learn their grandfather's work is now worth a fortune, each has an idea as to what Penelope should do. But as she recalls the passions, tragedies, and secrets of her life, she knows there is only one answer...and it lies in her heart.

Firstly, it was a pact made via the book club I was in where we have pledged to read a big book from this month and to finish it by March 2018. So I have actually pledged 2 big books for The KLBAC Big Book Challenge i.e. 1) The Shell Seekers by Rosamunde Pilcher and 2) American Gods by Neil Gaiman. 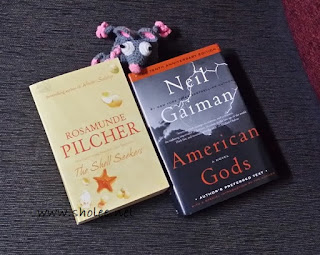 As American Gods is a hardcover, it's my secondary book to finish at home :-)

So my main read is The Shell Seekers and surprisingly, it's a damn good book! So engaging that I've finished it so soon! This is my first Rosamunde Pilcher's and I was delighted it's written so efficiently, so well plotted plus so entertaining! From the start to the end, apart from some lengthy fillers at times, the prose is precise and the plots relevant.

The story revolves around Penelope Keeling from when she was young to the day she died, how her children had evolved around her and how she managed to move on with life after a heart attack. It's quite interesting as Penelope was blessed to have Antonia and Danus with her through her last few months, making her life more accomplished, memorable and worthwhile.

My take on Penelope's children:
Nancy - the materialistic one
Olivia - the workaholic one
Neal - the greedy one

Though it had me at Diva channel's mini series, I can so imagine who is who as it's so precisely elaborated! I liked how Rosamunde has named each chapter after a character who will be storied in it. Such interesting method and yet flowing so fluidly even for a family drama about money, love and tragedy. It may be predictable at some point but it will be a surprise in the end. The best part, the story comes in full circle where it has a closure... the ending doesn't leave me hanging!

I am now looking forward to read her other books as I love such feel good completed endings! Some of the quotes which caught my attention:
"A lazy master makes a lazy servant"

Antonia's thought of her dad, Cosmo:
"My only real sadness is the years that were wasted after Olivia went. He never had another woman. He loved Olivia very much. I think, probably, she was the love of his life."

Richard Lomax's love letter sign off to Penelope Stern:
"So part of you goes everywhere with me. And part of me is yours forever. My love, my darling."

Some new words:
Diocese: a district under the pastoral care of a bishop in the Christian Church
Anachronism: a thing belonging or appropriate to a period other than that in which it exists, especially a thing that is conspicuously old fashioned
Umbrage: offence or annoyance
Penurious: extremely poor; poverty-stricken
Secateurs: a pair of pruning clippers for use with one hand
Junketings: attend or go on a trip or celebration at public expense
Ephemeral: lasting for a very short time
Email ThisBlogThis!Share to TwitterShare to FacebookShare to Pinterest
Sections: Books