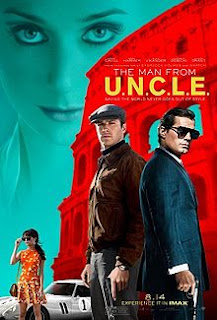 In 1963, at the height of the Cold War, professional thief-turned CIA agent Napoleon Solo extracts Gaby Teller, daughter of Dr. Udo Teller, an alleged Nazi scientist-turned United States collaborator at the end of World War II, from East Berlin, evading KGB operative Illya Kuryakin. He later reports to his superior, Sanders, who reveals that Gaby's maternal uncle Rudi works in a shipping company owned by Alexander and Victoria Vinciguerra, a wealthy Nazi-sympathizing couple who intend to use Teller to build their own private nuclear weapon and give it to lingering Nazi elements. Due to the potentially world-ending nature of this crisis, the CIA and KGB have reluctantly teamed up, and Solo and Kuryakin are ordered to stop the Vinciguerras from succeeding, with both men secretly assigned to steal Udo Teller's research for their respective governments.

The trio travels to Rome, where Gaby and Kuryakin reluctantly pose as an engaged couple, and Solo pretends to be an antiquities dealer. Solo deduces they are being monitored and instructs Kuryakin not to defend himself from muggers so as to preserve this cover. Despite their hostilities towards each other, Kuryakin heeds his advice and does not react when his father’s prized watch is stolen. Later, at an auto racing event promoted by the Vinciguerras, Solo and Gaby flirt with Victoria and Alexander, respectively, in order to lure out information about Teller. Meanwhile Kuryakin acquires evidence the Vinciguerras were recently exposed to radiation, indicating that their weapon is near completion.

Solo and Kuryakin begrudgingly join forces to break into a Vinciguerra shipping yard, in which they find traces of uranium. After accidentally setting off the alarm, they escape into the water only to find their way blocked. During the ensuing scuffle with the guards, Kuryakin nearly drowns in the waters but Solo escapes, only to surprise himself by returning to save Kuryakin. Although a suspicious Victoria pursues them with her henchmen, Solo and Kuryakin manage to slip past into their own rooms undetected, and Victoria and Solo spend the night together. The following day, Gaby meets with Rudi and Alexander to discuss a job, but unexpectedly betrays Kuryakin and Solo to them, forcing Kuryakin to escape, while Solo is drugged and captured by Victoria and taken to a nearby warehouse to be tortured in an electric chair by Rudi, who is revealed as an infamous Nazi torturer. Solo is saved by Kuryakin, who straps Rudi into the electric chair, in order to intimidate him into talking. Rudi reveals that the weapon is hidden in an island fortress, where Gaby has been reunited with her father, which is where Solo and Kuryakin head off to, with Rudi unintentionally being burnt alive due to the electric chair malfunctioning. To protect Gaby, Dr. Teller pretends to resume work on the weapon, which has a tracking system left over from when the warhead was non-nuclear, so that a second missile can home in on it for added impact, but although Gaby attempts to help her father escape and sabotage the warhead Victoria quickly sees through this deception, and has Alexander imprison Gaby, as an extra incentive for Dr. Teller. Teller quickly adds the finishing touches to the bomb, but is then shot in the head by Victoria as soon as he does.

I remember watching the TV series way back then but for the life of me, I can't recall who or what. Anyway, while watching this movie, it did remind me of Kingsman. The way they spoke, acted and dressed. I just loved those 60's fashion and make-up! So retro and eccentric! Though the men's dressing were bland, the ladies were so fad and inspiring!

Fashion aside, the movie itself was kinda slow at times. There were some actions but still slow. Overall, entertaining and funny at times but still slow. I guess I've expected more exciting scenes with intelligent bickering. LOL!
Email ThisBlogThis!Share to TwitterShare to FacebookShare to Pinterest
Sections: Movies