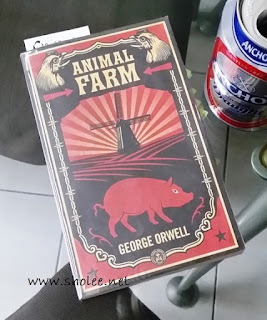 Mr. Jones of Manor Farm is so lazy and drunken that one day he forgets to feed his livestock. The ensuing rebellion under the leadership of the pigs Napoleon and Snowball leads to the animals taking over the farm. Vowing to eliminate the terrible inequities of the farmyard, the renamed Animal Farm is organized to benefit all who walk on four legs. But as time passes, the ideals of the rebellion are corrupted, then forgotten. And something new and unexpected emerges.

I felt like I was reading an elementary text book about politics in general hence my low rating. It is definitely an easy read especially for anyone who wants to understand more of communism and how to run a government albeit in animal form. Very well laid out and straightforward, nothing complicated and written with clarity.

From the Rebellion to the Beasts of England, from the loyal citizens to the power hungry and shrewd politicians, George Orwell has depicted very well of the political frenzy, apparently of the Russian Revolution and Stalin, but seemingly relevant in the current world too. Though a novella, it does packed a punch. Also, now I know why they have pigs on most covers of this book LOL!

I did expect the ending to be different - such as the animals finally rebelled against the pigs or the humans finally fought back the farm. Unfortunately, it just ended as it is with the pigs leading the farm and ganged up with the humans, leaving the rest of the animals to be lower caste citizens working their ass off. The below paragraph from the last page says it all:

"Twelve voices were shouting in anger, and they were all alike. No question, now, what had happened to the faces of the pigs. The creatures outside looked from pig to man, and from man to pig, and from pig to man again: but already it was impossible to say which was which."

Dissentients - in opposition to a majority or official opinion
Indefatigable - a person of their efforts persisting tirelessly
Forsook - forsake
Inebriates - make someone drunk; intoxicate
Email ThisBlogThis!Share to TwitterShare to FacebookShare to Pinterest
Sections: Books