MPOV: The Perks of being a Wallflower 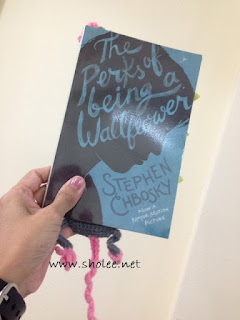 The critically acclaimed debut novel from Stephen Chbosky, Perks follows observant “wallflower” Charlie as he charts a course through the strange world between adolescence and adulthood. First dates, family drama, and new friends. Sex, drugs, and The Rocky Horror Picture Show. Devastating loss, young love, and life on the fringes. Caught between trying to live his life and trying to run from it, Charlie must learn to navigate those wild and poignant roller-coaster days known as growing up.

Another awesome book which I thoroughly enjoyed! I'm on a roll baby... this year itself I've read many good books!

I liked that this book was different, uniquely written with straightforward prose. Stephen was able to reflect candidly Charlie's 15 years old thought with ease especially since it's in a letter writing format. It felt so surreal, reading those letters as though it has been addressed to me. I can feel Charlie's inability to express himself though a humble boy but I could also feel he's a little unstable psychologically. Perhaps the suppressed memory caused it plus his low self esteem... a self-absorbing youth with non-judgmental attitude.

Reading it with mixed emotions from feeling appalled to happiness to depressed... definitely felt surprised with it's aloofness, openly talked about drugs, cigarettes, sex, abortion, etc. It was like an open book of a teenage boy going through adolescent with a few good friends albeit older... some gay, some straight. His deep love for Sam, though one-sided, was sweet and nonchalant. No hidden ammo, just pure mind-boggling thoughts. I'm just glad that Charlie finally saw the light in the end.

I was surprised many famous books were mentioned here, reading assignments from Bill, a dedicated teacher, as he thought Charlie was a very talented student and always guiding him academically:
"Charlie, you're one of the most gifted people I've ever known. And I don't mean in terms of my other students. I mean in terms of anyone I've ever met. That's why I gave you the extra work. I was wondering if you were aware of that?"

Even I haven't read some of it yet so it got me intrigued and definitely added to my TBR list:
On the Road by Jack Kerouac
Naked Lunch by William S. Burroughs
The Stranger by Albert Camus
This Side of Paradise by F. Scott Fitzgerald
Peter Pan by J.M. Barrie
A Separate Peace by John Knowles
To Kill a Mockingbird by Harper Lee - read this!
The Catcher in the Rye by J.D. Salinger - in my TBR pile!
The Great Gatsby by F. Scott Fitzgerald - read this!
Hamlet by William Shakespeare - read this!
Walden by Henry David Thoreau
The Fountainhead by Ayn Rand

No thoughts of watching the movie yet... this book has already entertained me fully. Some interesting moments I've liked:
When they were in Sam's car, driving through a tunnel, listening to the radio:
Sam tapped her hand on the steering wheel. Patrick held his hand outside the car and made air waves. And I just sat between them. After the song finished, I said something. 'I feel Infinite.'

I was perplexed here when Patrick suddenly moved to kiss Charlie:
So, he said "thanks" and hugged me again. And moved in to kiss me again. And I just let him. I don't know why. We stayed in his car for a long time.

The moment he realized what was wrong with him when he was with Sam:
Until she moved her hand under my pants, and she touched me. That's when I stopped her.

"We are all infinite"
Email ThisBlogThis!Share to TwitterShare to FacebookShare to Pinterest
Sections: Books