MPOV: Guardians of the Galaxy Vol. 2 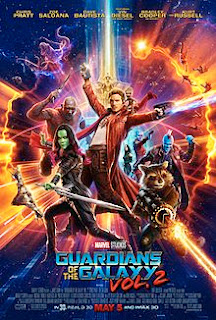 In 2014, Peter Quill, Gamora, Drax, Rocket, and Baby Groot are renowned as the Guardians of the Galaxy. Ayesha, leader of the Sovereign race, has the Guardians protect valuable batteries from an inter-dimensional monster in exchange for Gamora's estranged sister Nebula, who was caught attempting to steal the batteries. After Rocket steals some for himself, the Sovereign attacks the Guardians ship with a fleet of drones. The drones are destroyed by a mysterious figure, but the Guardians crash-land on a nearby planet. The figure reveals himself as Quill's father, Ego. He invites Quill, Gamora, and Drax to his home planet, while Rocket and Groot remain behind to repair the ship and guard Nebula.

Ayesha hires Yondu Udonta and his crew, who have been exiled from the greater Ravager community for child trafficking, to recapture the Guardians. They capture Rocket, but when Yondu hesitates to turn over Quill, whom he raised, his lieutenant Taserface leads a mutiny with help from Nebula. Taserface imprisons Rocket and Yondu aboard Yondu's ship and executes his loyalists while Nebula leaves to track down and kill Gamora, whom she blames for all the torture inflicted on her by their father, Thanos. While imprisoned, Rocket and Yondu bond. Groot and Yondu's loyalist Kraglin free Rocket and Yondu, and they destroy the ship and its crew as they escape, though not before Taserface warns the Sovereign.

Ego, a god-like Celestial that manipulated the matter around its consciousness to form his "home" planet, explains that he projected a humanoid guise to travel the universe and discover a purpose, eventually falling in love with Quill's mother Meredith. Ego hired Yondu to collect the young Quill after Meredith's death, but the boy was never delivered and Ego has been searching for his son ever since. He teaches Quill to manipulate their Celestial power. Nebula arrives at Ego's planet and tries to kill Gamora, but the pair reach an uneasy alliance when they discover caverns filled with skeletal remains. Ego reveals to Quill that in his travels he planted seedlings on thousands of worlds which can terraform them into new extensions of himself, but they can only be activated by the combined power of two Celestials. To that end, he impregnated countless women and hired Yondu to collect the children, but killed them all when they failed to access the Celestial power. Under the influence of Ego's power, Quill helps him activate the seedlings, which begin to consume every world, but Quill fights back when Ego reveals that he killed Meredith due to the distraction she posed.

This is an awesome movie!!! Very enjoyable from the start to the last of the post credit scenes! BTW, it has many ya! It may not be as logical but then it is a superhero movie with many superheroes and an unlikely villain. Emoted as many emotions from funny to sad to touche to spunky to etc!

Fast paced and never a dull moment, I nearly can't keep up with it! Quill having found his real father, Ego (How apt his name was LOL!). Gamora's new bond with her sister, Nebula. The adorable Baby Groot. Rocket's unexpected reveal by Yondu who has also turned over a new leaf. So many exciting plots within the action-packed movie!

Thankfully it didn't looked like it was cramped into this movie, paced well with realistic visual effects... truly a movie worth watching and I can't wait for Vol. 3 now!!! FYI, Michelle Yeoh has been casted ya!!!
Email ThisBlogThis!Share to TwitterShare to FacebookShare to Pinterest
Sections: Movies