MPOV: The Girl on the Train (ARC) 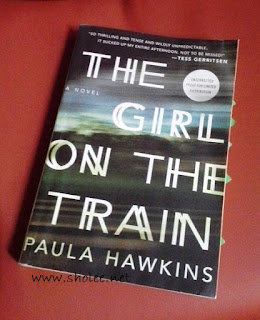 EVERY DAY THE SAME
Rachel takes the same commuter train every morning and night. Every day she rattles down the track, flashes past a stretch of cozy suburban homes, and stops at the signal that allows her to daily watch the same couple breakfasting on their deck. She’s even started to feel like she knows them. Jess and Jason, she calls them. Their life—as she sees it—is perfect. Not unlike the life she recently lost.

UNTIL TODAY
And then she sees something shocking. It’s only a minute until the train moves on, but it’s enough. Now everything’s changed. Unable to keep it to herself, Rachel goes to the police. But is she really as unreliable as they say? Soon she is deeply entangled not only in the investigation but in the lives of everyone involved. Has she done more harm than good?

Firstly, the copy that I have is an ARC version with uncorrected proof so I thought it would not be as good but I was wrong. Overall, the book was engaging from the getgo and had me glued, rushed towards the end to know who's the actual killer. Though not as enthralling at times, the twisted ending had me at 'duh!!!' LOL! The way the plots were weaved through definitely got me thinking... maybe it was Rachel... or perhaps Scott... or Anna??? but in the end... no spoilers lah! Though not as refined, it's easy prose with twisted plots definitely had me on my toes! Fillers could have been reduced but then, I would not know since this is the uncorrected proof version. Not sure if I would watch the movie but this book was really intense and gripping.

I've not read anything with as much self-hate, self-loathing, anger, demotivated before. It's so realistic especially since Rachel is an alcoholic with low self-esteem and jobless. Her rants may be over at times but it is valid for a psychotic meltdown especially. How low can she be... not being able to let go of a man who's two-timing her!

Anna who is the other woman, on the other hand, gets karma in her face! Of course, I liked that LOL! Well, stealing another woman's husband is not a smart move as old habits die harder ya and not for long he'll have another affair! Anyway in the end, a woman will always backed another woman especially when it involves an unfaithful husband. No spoilers here either!

Megan, the victim who was murdered, has an alter-ego even her husband tried to ignore. Psychologically unstable... adultery alter-ego... so much drama that it got her killed. This is where the plot gets thicker!

All in all, it's a book which is 'unputdownable' LOL!!!

Just 1 new word for me:
Decrepit - worn out or ruined because of age or neglect
Email ThisBlogThis!Share to TwitterShare to FacebookShare to Pinterest
Sections: Books